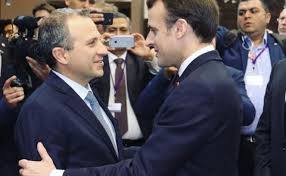 French President Emmanuel Macron gathered Tuesday evening with representatives of the country's top nine political blocs in the second such talks since the blast disaster.

Representatives of Hizbullah, designated by the U.S. and European countries as a “terrorist” group, were among those meeting Macron.

The French president said this was necessary as Hizbullah is part of the Lebanese political system and excluding it "would be a mistake."

Following the all-party meeting, Macron held separate, closed-door talks with each of the political leaders present at the Pine Residence in Beirut.

The Macron-Bassil talks involved “a comprehensive discussion of the situation in Lebanon and of the French-Lebanese cooperation,” the TV network said.

It was also attended by the members of the accompanying French delegation, the members of the Lebanese parliament’s Lebanese-French Friendship Committee, the deans of the consular and diplomatic corps, the papal ambassador to Lebanon, the ambassadors of EU countries, the chiefs of security agencies, senior state employees and a number of Lebanese and French businessmen and economists.

Representatives of Hizbullah, designated by the U.S. and European countries as a “terrorist” group, were among those meeting Macron.