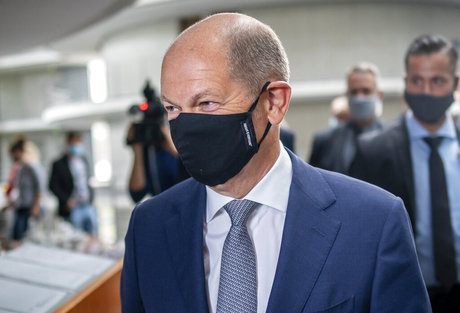 German Finance Minister Olaf Scholz was grilled by lawmakers Wednesday as he faced growing pressure over his role in two financial scandals that have shaken the country.

The Social Democrat who hopes to succeed conservative Angela Merkel as chancellor was taken to task by MPs for missing red flags about payments firm Wirecard, after it collapsed in June with a 1.9-billion-euro ($2.3 billion) hole in its balance sheet.

Scholz was also quizzed about the country's "cum-ex" tax fraud saga, a complicated share dividend scam that went on for years and is estimated to have cost the state some 5.5 billion euros.

Scholz however denied having exerted pressure on Hamburg's tax authority over Warburg's cum-ex activity, after revelations that shortly after a telephone conversation in 2016 between then-Hamburg mayor Scholz and the bank's former boss Christian Olearius, tax authorities dropped a claim of 47 million euros against the company.

"There shouldn't be and there wasn't any political intervention in Hamburg," Scholz told MPs.

Scholz also said he was confident that legal proceedings against cum-ex suspects would allow the state "to recoup billions in taxpayer money".

Florian Toncar, an MP for the liberal FDP opposition party, said it was up to Scholz to clear up suspicions that the Warburg bank received "preferential treatment."

But lawmaker Carsten Schneider, of Scholz's center-left SPD, said the political tough talk was part of electioneering ahead of Germany's 2021 elections.

"They are trying to discredit the character of the finance minister… and in doing so they want to damage the SPD's candidate for chancellor."

When vice-chancellor Scholz was nominated in August as the center-left Social Democrats' chancellor candidate next year, he was seen as a safe pair of hands.

A party veteran, competent, perhaps a little bland –- he was the party's obvious answer to Angela Merkel of the centre-right CDU party, who is bowing out after four terms.

Few German politicians have been in the limelight as much as Scholz in recent years, and he has risen to become one of the country's most popular politicians over his handling of the economic fallout of the coronavirus pandemic.

He has given his party a small boost in the polls, with the SPD now polling at around 16 percent, still well behind Merkel's center-right bloc with 35 percent.

But his long political history has given his opponents much to pore over.

As finance minister his portfolio includes the financial markets regulator BaFin, which has been accused of botching its oversight of digital payments provider Wirecard, now suspected of large-scale, international fraud.

The Financial Times newspaper raised suspicions about Wirecard's business activities in a series of articles in 2019, but these did not apparently prompt German authorities to look at Wirecard more closely.

German prosecutors instead opened investigations into the FT journalists themselves, fueling criticism that regulators failed to act on early warning signs.

Scholz on Wednesday said he was "grateful for the work" of the FT reporters.

He has proposed a series of reforms to strengthen supervisory bodies in the finance sector as well as tougher rules for auditors.

Unsatisfied with the government's response so far, German opposition lawmakers want to launch a full parliamentary inquiry into the Wirecard collapse.