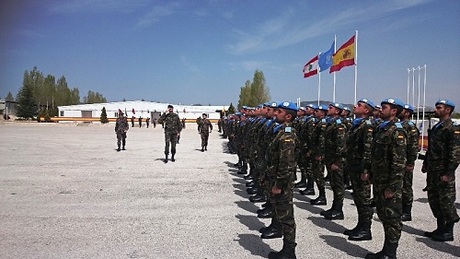 Ninety U.N. peacekeepers in south Lebanon have tested positive for the novel coronavirus, a spokesman for the UNIFIL force said on Sunday, the first reported cases of the illness.

The confirmed cases were transferred to a special UNIFIL facility equipped to deal with Covid-19 cases, UNIFIL spokesman Andrea Tenenti said in a statement.

He said 88 of those infected belonged to the same contingent, but he did not specify the nationalities of the 90 peacekeepers.

"We have undertaken robust contact tracing, and applied a thorough regime of testing and isolation" to prevent a larger outbreak, he said.

Some 45 countries contribute peacekeepers to UNIFIL, which was set up in 1978 to patrol the border between Lebanon and Israel which are technically at war.

In August, the U.N. extended the peace mission's mandate by one year but reduced the force's troop capacity from 15,000 to 13,000.

Tenenti said that UNIFIL's operations along the Lebanon-Israel border are not affected by the new virus cases.

Lebanon has seen a spike in the number of confirmed coronavirus cases since an August 4 explosion ripped through the Beirut port, killing more than 190 people and ravaging swathes of the capital.

The small Mediterranean country has recorded a total of 23,669 Covid-19 cases, including 239 deaths since an outbreak began in February.

On Saturday, authorities announced 22 coronavirus cases at the Roumieh prison, the country's largest detention center which has long been infamous for the poor conditions in some of its blocks, including overcrowding and harsh treatment.