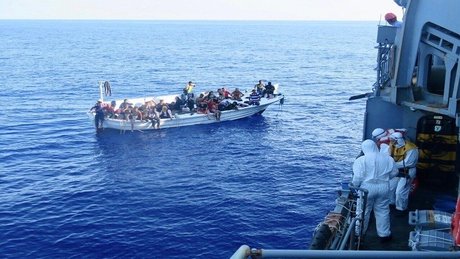 Spokesman for the United Nations Interim Force in Lebanon Andrea Tenenti said Monday that a ship belonging to the UN peacekeeping maritime force had located a boat outside the Lebanese territorial waters carrying 37 people on board, and unfortunately one of them had died.

“The priority for the UN peacekeeping force was to rescue the remaining 36 people and ensure their safety through," said Tenenti in a statement.

The UNFIL had immediately informed Lebanese authorities about the incident.

UNIFIL Head of Mission and Force Commander Major General Stefano Del Col said the incident "is very tragic. The UNIFIL Maritime Task Force is doing their best to save the lives of these people. Our first priority is to ensure the safety of all 36 people we have just saved.”

The UNIFIL Maritime Force is the first of its kind in the United Nations peacekeeping mission.

It was deployed at the request of the Lebanese government to assist the Lebanese Navy in securing the territorial waters and to help prevent unauthorized entry of weapons or related materials by sea into Lebanon.

Cypriot authorities were alarmed lately over the arrival of boats carrying Syrian and Lebanese migrants.