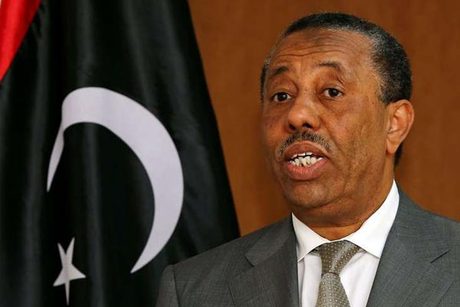 The head of Libya's parallel government installed in the country's east has handed in his resignation following street protests against corruption and falling living standards that turned violent, his spokesman said Monday.

Parliament spokesman Abdallah Bleheq said the resignation would be discussed at a meeting of the house, without giving a date.

Demonstrations by hundreds of protesters that kicked off peacefully last Thursday turned violent on Sunday when the headquarters of the parallel eastern administration controlled by strongman Khalifa Haftar was set ablaze.

The fire destroyed the main entrance to the building in Libya's second city of Benghazi, cradle of the 2011 revolution that toppled and killed longtime autocrat Moammar Gadhafi.

Protests, which are rare in areas under Haftar's control, also erupted in another eastern town, Al-Marj, where police fired live rounds Saturday night after demonstrators forced their way into the police station.

At least five people were wounded, according to witnesses and the town's hospital.

The United Nations Support Mission in Libya on Monday expressed "grave concern regarding reports that one civilian was killed, three were injured, and a number of other demonstrators arrested" in Al-Marj.

The casualties were the result of "the reported excessive use of force by eastern authorities against peaceful demonstrators," UNSMIL said in a statement.

It called for an immediate investigation and "the speedy release of all those arbitrarily arrested and detained."

The parliament, installed in the east since it was elected in 2014, disputes the legitimacy of the U.N.-recognized Government of National Accord based in Tripoli.

Anger on Libyan streets has previously spilled over in GNA-controlled areas.

The demonstrations across Libya have been "motivated by deep-seated frustrations about sustained poor living conditions, shortages of electricity and water, rampant corruption, misgovernance, and a lack of service provision throughout the country," UNSMIL said.

Libya, which sits on the continent's biggest crude oil reserves, has endured almost a decade of violent chaos since the NATO-backed uprising against Kadhafi.

Since January, pro-Haftar groups have blocked the country's most important oil fields to demand what they call a fair share of oil revenues.

The blockade -- which has caused more than $9.6 billion in lost revenue, according to the National Oil Corporation -- has exacerbated electricity and fuel shortages.