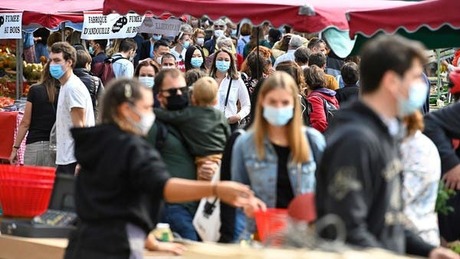 Veran, who will now hold weekly press conferences to chart the outbreak's progression, said measures would be announced for Lyon and Nice by Saturday, after curbs on public gatherings were imposed this week in Bordeaux and Marseille.

Marseille could see even more restrictions, such as bar closings or a ban on public gatherings, "if the situation doesn't improve," he said.

Already the so-called incidence rate, the number of cases for every 100,000 inhabitants, stands at 200 in Lyon and Nice, which Veran said was four times the virus alert threshold.

And a growing number of patients require intensive care, he said, heightening fears of a surge that would strain hospitals and health workers after the pandemic flared in March.

"Our battle is to implement the measures that will avoid an influx at hospitals -- it's a race against the clock," Veran warned.

"We have to take these decisions at the right time; not too early because they are restrictions, but not too late either."

Only people showing symptoms or with a doctor's prescription should seek tests, he said, to avoid a deluge of requests at labs already struggling to keep up.

He said the health ministry had ordered five million antigen test kits, which can give preliminary readings on Covid-19 contagion in just 30 minutes, for delivery in early October.

And regulatory approval for saliva tests is expected "imminently", he said.

France has reported nearly 10,000 new cases per day over the past week, prompting officials to urge people to limit social gatherings and maintain handwashing and other protective measures.

Interior Minister Gerald Darmanin told a Senate panel Thursday that nearly 45,000 fines of 135 euros ($160) each had been issued for not wearing a face mask  since the nationwide virus lockdown was lifted in mid-May.