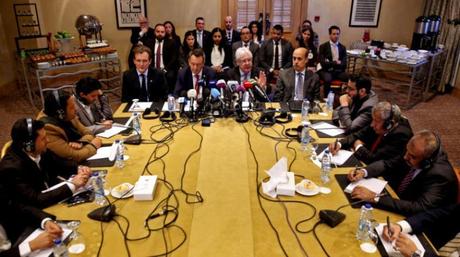 Rival parties in Yemen's war opened U.N.-sponsored talks Friday aimed at an exchange deal for the release of more than 1,400 prisoners, the United Nations said.

The government, supported by a Saudi-led military coalition, and Iran-backed Shiite Huthi rebels agreed to exchange some 15,000 detainees as part of peace deal brokered by the United Nations in Sweden in 2018.

The two sides have since made sporadic prisoner swaps, but the release of 900 loyalists in exchange for 520 insurgents -- if it materialises -- would mark the first large-scale handover since the war erupted in 2014.

"The #Yemen Prisoners & Detainees Committee meeting started today. I am grateful to #Switzerland for hosting it & to @ICRC for co-chairing," U.N. envoy Martin Griffiths tweeted, without giving an exact location for the talks.

"My message to the Parties is: conclude discussions, release detainees swiftly, bring relief to thousands of Yemeni families," he wrote.

The International Committee of the Red Cross, for its part, said it was ready to help with the return of detainees to their families.

A source close to Yemen's presidency said Wednesday that the talks in Switzerland would "lay out the final touches" after agreement was reached with the ICRC "on all logistical arrangements".

General Nasser Mansour Hadi, brother of Yemeni President Abedrabbo Mansour Hadi, along with 19 Saudis and other politicians and journalists, would be among those released, he said.

A former senior intelligence official, the general has been held by the rebels ever since they overran Sanaa in late 2014.

The Yemen conflict has killed tens of thousands of people, most of them civilians, and sparked what the United Nations calls the world's worst humanitarian crisis.