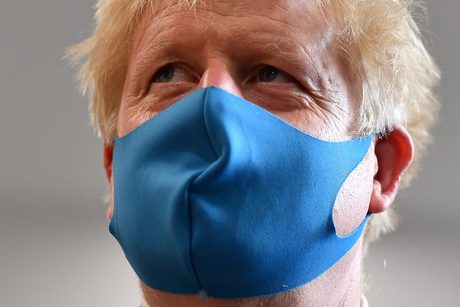 Britain is seeing a second wave of the coronavirus outbreak, Prime Minister Boris Johnson said on Friday, as millions more people faced new restrictions and the government warned that another national lockdown could be imminent.

"There's no question, as I've said for several weeks now, that we could expect and are now seeing a second wave coming in," said Johnson as he toured the site of a new vaccines center in Didcot, near Oxford.

"We are seeing it in France, in Spain, across Europe -- it has been absolutely, I'm afraid, inevitable we were going to see it in this country."

His gloomy announcement came as government scientific advisors said the R number representing the number of people an infected person will pass the virus to rose to between 1.1 and 1.4, up from 1.0 to 1.2 last week.

"This is undoubtedly concerning," said Kevin McConway, emeritus professor of applied statistics at the Open University.

"Even at growth rates within the estimated range, the number of new cases could grow to high levels quickly if the interventions are not sufficiently effective."

Tighter rules preventing people from socializing with anyone from outside their household come into force from Tuesday across parts of northwest, northern and central England.

Food and drink venues will only be allowed to serve at tables, while pubs and bars will be shut early at 10:00 pm (2100 GMT).

Similar rules were imposed in northeast England on Friday, which put more than two million people under some of the most stringent restrictions since a nationwide lockdown was eased.

Health Secretary Matt Hancock said the move followed a request from local authorities because of a surge in positive cases.

He also warned the government could re-impose the nationwide lockdown which was partially lifted in June, as the rates of hospital admissions were now doubling every eight days.

"We want to avoid a national lockdown but we're prepared to do it if we need to," he told BBC television, vowing to "do what it takes" to protect the public.

Johnson said a second national lockdown was "the last thing anybody wants", and urged adherence to social distancing guidelines limiting contacts to groups of six or fewer.

The rise in cases heaps fresh pressure on Johnson's government, which has been criticized for its response to the outbreak, which has claimed nearly 42,000 lives -- the highest in Europe.

Numbers of new cases are reaching levels not seen since April, reflecting a similar picture across Europe, where the World Health Organization said there were "alarming rates of transmission."

Britain's Office for National Statistics (ONS) confirmed Friday in its weekly infection survey that "the incidence rate for England has increased in recent weeks."

It estimated there were around 6,000 new daily cases nationwide over the week to September 10 -- roughly double the number typically recorded in statistics released every day by the health ministry.

Public Health England medical director Yvonne Doyle said there were "clear signs" of a spread of the virus across all age groups, and a rise in hospital admissions of older people.

"This could be a warning of far worse things to come," she added.

The ONS noted there was evidence of higher infection rates in London, as well as northwest England. But Johnson's spokesman said "no restrictions are currently planned" in the capital.

Government scientists have reportedly proposed a blanket lockdown to come into force across England over two weeks in October, to coincide with English schools' half-term holiday.

But the spokesman pushed back against the report.

The government has faced sustained criticism for its failure to achieve the "world-beating" testing and tracing system it promised would be in place over the summer months.

Hancock defended the testing program, and said the government was "doing everything we possibly can for the cavalry that's on the horizon of the vaccine and mass testing."