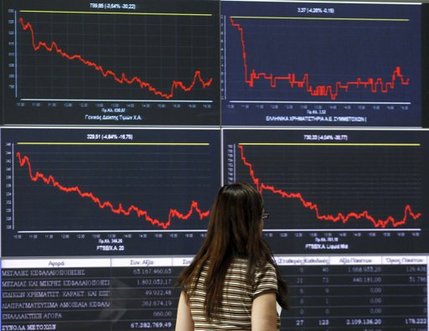 The banking sector was also rocked by the findings of an international journalism investigation that claimed massive sums of allegedly dirty money have flowed for years through some of the world's largest banking institutions.

The broad-based S&P 500 and the tech-rich Nasdaq both gave up around two percent.

The European single currency was pushed under $1.18 as dealers sought the traditional safety of the dollar, while oil prices shed almost 2.0 percent on weak energy demand concerns.

"Sentiment was ice cold in the markets... as the FTSE 100 fell sharply below the 6,000 (points) mark," remarked investment director Russ Mould at online broker AJ Bell.

"The move followed mixed trading in Asia and matched similar-sized drops on other European exchanges as investors weigh concerns around a new wave of coronavirus infections and fears that central banks are not immediately coming to the rescue with a fresh round of stimulus."

Most Asian bourses also fell following a disappointing performance Friday on Wall Street, on growing alarm over an uptick in coronavirus infections in Europe and the United States -- as well as the lack of movement in Washington on a new stimulus.

"Profits from deadly drug wars, fortunes embezzled from developing countries, and hard-earned savings stolen in a Ponzi scheme were all allowed to flow into and out of these financial institutions, despite warnings from the banks' own employees," according to the probe.

Elsewhere, Sweden unveiled a budget including a plan to reboot the virus-hit economy with a ten billion euro stimulus which will take the country's finances into deficit for the first time in five years by 4.2 percent of GDP this year and 1.6 percent next year.

Tokyo - Nikkei 225: Closed for a holiday