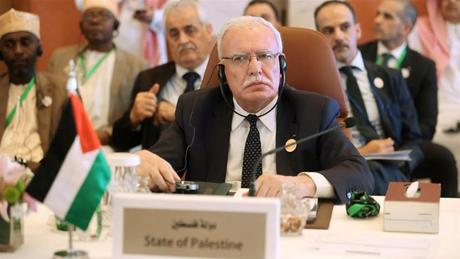 The Palestinians have stepped down from a key Arab League role in protest at the regional bloc's failure to take a stand against Israeli-Arab deals, an official said Tuesday.

Palestinian foreign minister Riyad al-Maliki announced the decision to resign from the rotating presidency of the Council of the Arab League, after its failure to agree a draft resolution condemning a normalization accord between the UAE and Israel.

"The state of Palestine... refuses to record in its history the association of its presidency with the regression in values and principles that was evident in the last meeting of the council of foreign ministers," Maliki said in the West Bank town of Ramallah.

The Palestinians presided over the council's latest session earlier this month and had been due to stay in the role until March.

Their delegation had tabled a draft resolution at the meeting of the council, which brings together foreign ministers of the 22-member bloc, to condemn the normalization accord.

The Cairo meeting came ahead of another such deal being announced by Bahrain with the Jewish state. Both deals were signed in Washington on September 15.

The Gulf agreements broke with years of Arab League policy on the Israeli-Palestinian conflict and were condemned by the Palestinians as a "betrayal."

In 2002, the bloc adopted a Saudi-proposed peace plan which was renewed as recently as 2017.

It offered normalization only in return for a full Israeli withdrawal from territories it occupied in the 1967 Six-Day War, a Palestinian state with east Jerusalem as its capital and a just solution for Palestinian refugees.

The Arab plan has been pushed aside by the U.S. administration, which after several delays unveiled a controversial peace blueprint of its own in January.

It promised Washington's blessing for Israel's eventual annexation of swathes of the occupied West Bank.

The United Arab Emirates government hailed a clause in its U.S.-brokered deal that appeared to put any Israeli annexations on hold.

But Israel retorted that any delay would be short-lived and its annexation plans remained on the table.

The Palestinians must initiate a boycott of all countries which maintain contacts with Israel, including Egypt, Jordan, UAE, Bahrain, Turkey, Qatar, Sudan, KSA and Morocco. That will surely stop other countries from following suit. Also, the pain of the boycott will cause all of those countries to yield to the Palestinian demands.

Why do you mention only Arab States, what about the other 170+ countries which have diplomatic relations with Israel? How about they boycott them as well?
According to your plan, soon they will only have relations with "all the advanced countries of the world", namely Syria, Iraq, Iran, Pakistan, Algeria, Tunisia, Yemen, North Korea and Bangla Desh. Oops I forgot to add Lebanon.