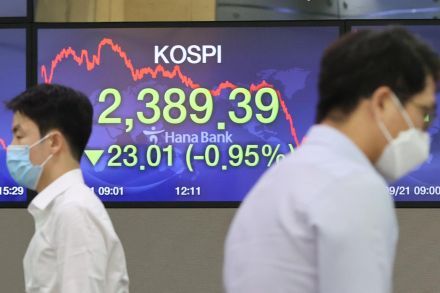 Months of mind-boggling gains in global equities have come to a juddering halt this month, and expectations are fading that a wall of cash from governments and central banks will jump-start a rebound.

"Markets are digesting and grappling with this idea that the growth expectations that investors have might not materialise," said Lauren Goodwin, at New York Life Investments.

"As the fiscal impulse in the US starts to wane, some of these expectations for a slow and steady recovery are shaken."

And with the northern hemisphere now moving into autumn and winter, there are worries that a second wave of coronavirus will see the reimposition of strict, economically devastating containment measures.

France became the latest European country to act, shutting bars and restaurants in the second-biggest city Marseille and putting it on "maximum alert", while several others, including Paris, will see new restrictions, including limitations on public gatherings and earlier closing hours.

Britain's government has also shortened opening hours and has warned of other measures, while the Madrid region has locked down roughly 850,000 people and plans to extend its curbs.

US traders are now growing concerned that rising infections at home could see similar moves, and several Federal Reserve officials including boss Jerome Powell have called for a new stimulus to mitigate the impact.

But with politicians on Capitol Hill still at a standstill, hope for a deal is waning, particularly with a presidential election just around the corner.

But he said Fed vice chair Richard Clarida's warning that while the economy was seeing improvement, it was still in a "deep hole", would strike fear into traders.

"Clarida's messaging provides the most distinct read on the global economy. Inferring the world has probably just seen the bounce from a sudden stop, not a cyclical recovery but merely a restart," Innes added.

Michael Hewson at CMC Markets said: "The main problem the Fed has is that US politicians appear more interested in fighting an election campaign than helping to pass a new stimulus plan which would help the American people."

The tech-heavy Nasdaq led the way, tanking more than three percent after the Trump administration unveiled legislation aimed at limiting the liability shield of online services for content they host.

The Justice Department said the proposal was aimed at reforming a law that protects internet services from liability from third-party content.

And the losses flowed through to Asia again, with Hong Kong, Tokyo, Shanghai, Singapore, Bangkok and Jakarta all down more than one percent, while Mumbai and Taipei shed more than two percent.

Seoul also slumped more than two percent after South Korea said forces from the North had shot a South Korean official and burned him after he disappeared off a patrol vessel and ended up in Pyongyang's waters.

Sydney, Manila and Wellington were also down.

London, Paris and Frankfurt all fell around one percent in early trade.

Market unease was increased by fears of an extended battle over the US election result, with Donald Trump refusing to guarantee a peaceful transfer of power should he lose to Joe Biden.

"Well, we're going to have to see what happens," he said in response to a reporter's question.

Trump, who is behind in the polls against Democrat Joe Biden, has frequently claimed mail-in ballots are vulnerable to mass fraud and are being encouraged by Democrats to rig the election, though there is no evidence postal voting has ever led to significant fraud in the past.