'Armenians from Lebanon' among Foreign Fighters in Nagorno-Karabakh 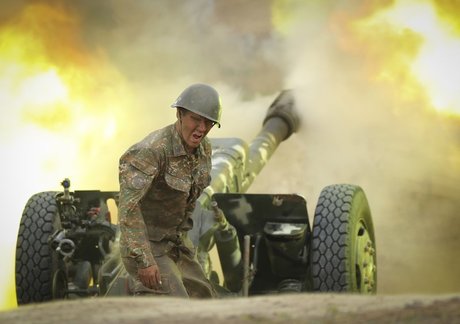 Armenia and Azerbaijan have traded accusations of using foreign fighters, including from Lebanon, in the battle for Nagorno-Karabakh.

From the onset of the clashes last Sunday, Armenia has accused Turkey of sending mercenaries from northern Syria to fight alongside the Azeris.

Pashinyan and Russian President Vladimir Putin, in a phone call, expressed "serious concern" over the reported "involvement in military action of militants of illegal armed groups from the Middle East", the Kremlin said.

French President Emmanuel Macron also weighed in, demanding that Turkey explain what he said was the arrival of jihadist fighters in Azerbaijan.

"A red line has been crossed, which is unacceptable," said Macron.

There has been no official comment from Turkey which backs Baku in the conflict, but Azerbaijan has denied the reports.

"There is yet another disinformation piece against Azerbaijan," Hikmet Hajiyev, a presidential foreign affairs aide, said in a news conference.

"We completely reject it, Azerbaijan doesn't need any foreign fighters because we have professional armed forces and we also have enough reserve forces."

But the Britain-based Syrian Observatory for Human Rights said more than 850 pro-Turkey Syrian fighters have been sent to Azerbaijan since last week, and at least 28 of them killed in combat.

Relatives of three fighters confirmed to AFP they had been killed, while social media users shared pictures of four fighters who died in clashes.

According to Macron, intelligence reports indicate 300 fighters drawn from "jihadist groups" from the Syrian city of Aleppo have passed through Gaziantep in Turkey en route for Azerbaijan.

"These fighters are known, tracked and identified," he said.

The Observatory says the Syrian fighters are members of pro-Turkish armed groups mostly active in the northern Afrin region which Ankara seized from Kurds in 2018.

But SNA spokesman Youssef Hammoud, in a statement sent to AFP, denied the involvement of his forces in Azerbaijan.

Last month, UN rights chief Michelle Bachelet said armed groups in the area of northern Syria controlled by Turkey may have committed war crimes and other violations of international law.

Aymenn Jawad Tamimi, an academic and expert on armed groups in Syria, said the fighters deployed were a mixed bag.

"Those going to fight are the same types of people who have been recruited to fight in Turkey's intervention in Libya," he said.

They are a "mixture of rebel veterans and newer recruits" and "some of these rebels previously received Western backing".

- Foreigners on Armenian side? -

Baku says Armenians from the diaspora have been deployed.

"Armenians from Syria and Lebanon are being deployed to Armenia and they are in the ranks of the Armenian armed forces fighting against Azerbaijan," Hajiyev said.

The Observatory said hundreds of Armenians from Syria have joined the battle, but an Armenian official in northern Syria denied the report.

Lebanese Armenian MP Hagop Pakradounian, for his part, said: "Armenian political parties have no intention of sending young people (to Karabakh), there is no such organised action."

God bless the Armenians of Lebanon for helping the Islamic resistance protect Lebanon and its borders from the extremists and terrorists operating in Karabakh.