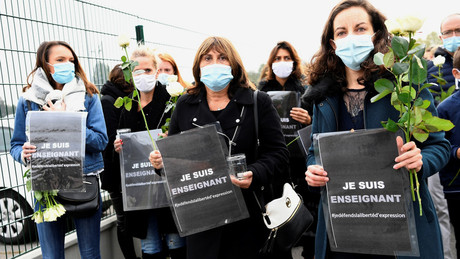 French police on Monday launched a series of raids targeting Islamist networks three days after the beheading of a history teacher who had shown his pupils a cartoon of the Prophet Mohammed.

Interior Minister Gerald Darmanin vowed there would be "not a minute's respite for enemies of the Republic", after tens of thousands took part in rallies countrywide on Sunday to honor history teacher Samuel Paty and defend freedom of expression.

Fifteen people were in custody on Monday, according to a judicial source, including four pupils who may have helped the killer identify the teacher in return for payment.

Those detained also included four members of the killer's family, as well as a known Islamist radical and the father of one of Paty's pupils who had launched an online campaign against the teacher.

Darmanin accused the two men of having issued a "fatwa" against Paty.

Sources in the interior ministry said there had been a total of 40 raids across France on Monday, mostly around Paris, and 20 per day were planned going forward.

"We want to harass and destabilize this movement in a very determined way," one ministry source said.

Darmanin said the government would also tighten its grip on NGOs with suspected links to Islamist networks, including the Anti-Islamophobia Collective, a group that claims to monitor attacks against Muslims in France.

"Fear is about to change sides," President Emmanuel Macron told a meeting of key ministers Sunday to discuss a response to the attack.

On Monday, he met members of Paty's family as part of preparations for a ceremony in the teacher's honor at the Sorbonne university Wednesday.

Paty, 47, was attacked on his way home from the junior high school where he taught in Conflans-Sainte-Honorine, 40 kilometers (25 miles) northwest of Paris.

A photo of the teacher and a message confessing to his murder was found on the mobile phone of his killer, 18-year-old Chechen Abdullakh Anzorov, who was shot dead by police.

The killing has drawn parallels with the 2015 massacre at Charlie Hebdo satirical magazine, where 12 people, including cartoonists, were gunned down for publishing cartoons of Mohammed.

Paty had shown his civics class one of the controversial cartoons, depicting a crouching prophet with a star on his buttocks.

According to his school, Paty had given Muslim children the option to leave the classroom, saying he did not want their feelings hurt.

The lesson sparked a furor nonetheless and Paty and his school received threats.

Anzorov's family arrived in France from the predominantly Muslim Russian republic of Chechnya more than a decade ago.

Locals in the Normandy town of Evreux where he lived described him as a loner who had become increasingly religious in recent years.

French teachers have long complained of tensions around religion and identity spilling over into the classroom.

One education expert warned Monday that the murder might deter teachers from tackling touchy topics in future.

"There's a huge amount of self-censorship," said Jean-Pierre Obin, a former inspector for the French education system. "We must fear that there will now be more."

But Jonathan Renoir, a 26-year old history teacher at a junior high school in Cergy near Paris, said: "We can't give in to fear, we must continue to talk about controversial things in class."

Another young history teacher, in Nice in southern France, said he, too, was "determined" to carry on.

"I will never stop teaching secularism and the freedom of expression, never," said the teacher who asked to remain anonymous.

The government has vowed to step up security at schools when pupils return after half-term.

Le Pen, who has announced she will make a third bid for the French presidency in 2022, called for an "immediate" moratorium on immigration and for all foreigners on terror watch lists to be deported.

Paty's beheading was the second knife attack since a trial started last month over the Charlie Hebdo killings.

The magazine republished the cartoons in the run-up to the trial, and last month a young Pakistani man wounded two people with a meat cleaver outside the publication's former office.

The Battle of Tours,[6] also called the Battle of Poitiers and, by Arab sources, the Battle of the Highway of the Martyrs (Arabic: معركة بلاط الشهداء‎, romanized: Ma'arakat Balāṭ ash-Shuhadā'),[7] was fought on 10 October 732, and was an important battle during the Umayyad invasion of Gaul. It resulted in victory by the Frankish and Aquitainian[8][9] forces under Charles Martel over the Umayyad Caliphate led by Abdul Rahman Al Ghafiqi, Governor-General of al-Andalus.

The Frankish will crush the head of the Islamist once again and will ruin the countries and organizations that fund them!

Freedom of speech, lovely isn't it? If you want to live in the west you must accept it regardless of religion, race, sex etc otherwise don't live there