Klopp Promises to Wait on Van Dijk Like a 'Good Wife' 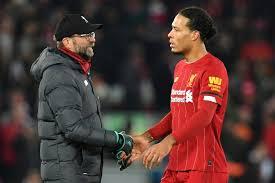 Van Dijk was on the end of a shocking challenge from Everton goalkeeper Jordan Pickford in Saturday's 2-2 draw in the Merseyside derby that will bring to an end his run of starting the last 94 Premier League games.

The 29-year-old's arrival from Southampton for a then world record £75 million fee for a defender in January 2018 has transformed Liverpool's fortunes. The Reds won the Champions League in 2019 and the Premier League for the first time in 30 years last season.

"We are there for him, he knows that and we will wait for him like a good wife is waiting when the husband is in jail and will do, meanwhile, all what we can do to make it as easy for him as possible," Klopp told Liverpoolfc.com.

The club have refused to put a timeframe on Van Dijk's return, but Klopp acknowledged he was facing up to a prolonged period without one of his most important players.

"He now will be out for a while, that’s clear. We don’t want to set any timeframe, to be honest, because each player is different and each individual is different," he added.

"So we feel now in this moment extremely, extremely for him because most of us were in a similar situation and we know that these situations are absolutely rubbish.