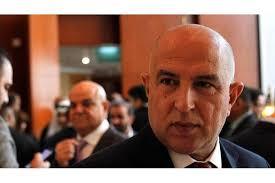 Iraq's anti-corruption commission on Monday said it had arrested an ex-governor accused of embezzling millions of dollars, including aid for citizens who had fled their homes in war.

Nawfel Akoub, who was sacked as governor of Nineveh in March 2019 after a ferry sank killing 150 people, had evaded arrest by hiding in the northern autonomous region of Iraqi Kurdistan.

Akoub, who has also been slapped with US sanctions for corruption, was arrested in the city of Mosul while paying bail for another case.

"Nineveh's former governor was arrested after a court order was issued," the country's anti-corruption commission said in a statement.

He and officials close to him are accused of taking public funds totaling nearly $64 million, it added.

Iraq's northern Nineveh province was left in ruins by more than two years of rule by the Islamic State group, and the fierce fighting to retake the city from the militants.

Akoub is accused of stealing money meant to help its reconstruction, including rebuilding two hospitals in Mosul and support for those who lost their homes in the conflict.

Graft is endemic across Iraq, which ranks among the world's worst offenders in Transparency International's annual Corruption Perceptions Index.

Since 2004, a year after the U.S.-led invasion that ousted Saddam Hussein, almost $450 billion of public funds have vanished into the pockets of shady politicians and businessmen, according to parliament.

Iraq gathered $30 billion in pledges from international donors in Kuwait in 2018 to rebuild the ruined province, but virtually none of the funds have been disbursed.

The lack of progress has been widely blamed on the country's infamous bureaucracy and rampant corruption.