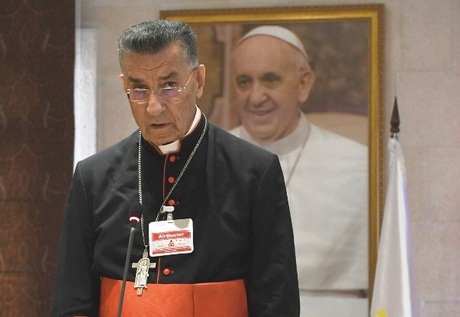 Maronite Patriarch Beshara el-Rahi said on Wednesday that the patriarchate carries the people’s concerns amid a soaring economic and political crises in Lebanon.

“The patriarchate carries the concerns of the Lebanese in the face of the stifling economic crisis which results from the country’s chronic political impasse,” said Rahi at the inauguration of the Maronite Bishops’ assembly meeting in Bkirki.

Describing the colossal Beirut port explosion on August 4 as Lebanon’s “worst crisis,” he said the blast destroyed swathes of the capital and traumatized thousands of people while the State stood idle “as if nothing happened.”

“The blast destroyed half of the capital, especially regions inhabited by Christians, not to mention the pain of relatives of 200 victims, seven missing, and 5,000 wounded, not to forget the massive destruction of houses, public and private institutions, churches, schools, archdiocese, and others at the absence of state officials — as if nothing had happened,” he added.

The Patriarch seized the opportunity to thank the countries that rushed to help those affected by the blast, as well as the humanitarian institutions and the dioceses in Lebanon and abroad.

“We carry them all in our prayers,” Rahi said.

This song we heard before. It seems God is not listening to the prayers, the situation of the Lebanese is getting from bad to worse

Maybe we need more singers and prayers? Or a miracle to wipe them all out

Chil ya batal... if religious clowns focused on religion instead of politics, things would be easier...