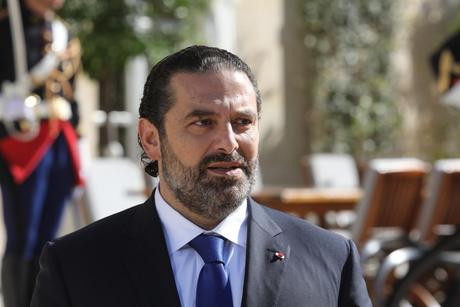 Saad Hariri, who was renamed Lebanon's premier Thursday, is a businessman who was propelled into politics by his billionaire father's assassination.

He returns to the post almost a year after stepping down in October 2019, just days into unprecedented cross-sectarian protests demanding an overhaul of Lebanon's entire political system.

The 50-year-old, who sports trademark slicked-back hair and a closely cropped beard, was thrust onto the political stage after his father Rafik, himself an ex-premier, was assassinated in a February 2005 car bomb attack.

But he has struggled to fill his father's shoes, last year grappling to address nationwide protests demanding the removal of a political elite viewed as incompetent and corrupt.

Hariri had cast himself as a champion of economic reform held hostage by unwilling coalition partners, but protesters categorised him as a product of Lebanon's hereditary politics.

His image was further tarnished when reports surfaced last year that he had sent $16 million dollars to a South African model, while his family business's employees were being laid off or left unpaid.

When protests erupted last autumn, Hariri's face emerged on flyers urging him to "Leave!", as demonstrators accused the ruling class of bringing the country to its knees.

In his year away since resigning, Lebanon's economy continued to crumble.

His successor resigned after a massive explosion at the Beirut port that killed more than 200 people.

In a rare televised interview earlier this month, he said he was "definitely" a candidate to take on the difficult task of forming a cabinet of independents to lift the country out of crisis.

Hariri sent shockwaves across the region in 2017 by resigning from office while in Saudi Arabia and accusing the Iran-backed Shiite movement Hezbollah of destabilising the region.

The announcement triggered a flurry of international interventions that eventually saw Hariri return to his post, adopting a more conciliatory tone towards the group which he blames for his father's killing.

He has had little success in reining in Hezbollah, the only faction to have retained its arsenal after Lebanon's 1975-1990 civil war.

Hariri's Future Movement lost a third of its seats in parliamentary elections in 2018, when Lebanon held its first legislative election in nine years and voters reinforced the Shiite movement's parliamentary weight.

It then took him more than eight months to form a new government, which was then in office less than a year before his resignation last autumn.

Hariri launched his political career at the urging of his family, after his father's death.

He left his post in Saudi Arabia running the Oger construction firm that was the basis of his family's business empire, and back in Beirut played a key role in mass demonstrations that ended a 30-year Syrian military presence in Lebanon.

In September last year, Hariri announced the suspension of Future TV, his ailing mouthpiece whose employees had been on strike over unpaid wages.

Forbes in 2018 estimated Hariri's net worth at $1.5 bn, but he has since claimed to now own much less.

"I don't even have a billion left," he said in this month's interview.

Hariri is generally soft-spoken in his public pronouncements, making jokes with reporters.

His close friends say he enjoys cooking and exercising, and would make appearances at Beirut bike rides and the city's annual marathon.

Hariri is regarded as de-facto leader of Lebanon's Sunni Muslim community, and as a man able to reach compromise.

But his political career has been something of a rollercoaster ride.

Hariri began his first term as prime minister in November 2009, forming a unity government with Hezbollah and its allies after marathon negotiations.

He stayed on as premier until January 2011, when Hezbollah and its allies abruptly withdrew their ministers from the cabinet and the government collapsed.

He stayed in self-imposed exile in France and Saudi Arabia for several years, but in 2016 decided to back a presidential bid by Hezbollah ally Michel Aoun.

The move ended more than two years of political stalemate, and saw Hariri return to head a unity government that again included Hezbollah.

Hariri's wife Lama Bashir-Azm, who is of Syrian origin, and their three children live in Saudi Arabia and remained there during his tenures as prime minister.