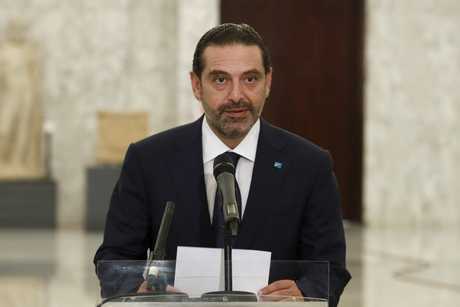 Three-time Lebanese prime minister Saad Hariri was renamed to the post Thursday to create a reform-orientated cabinet that can lift the country out of its worst economic crisis in decades.

Hariri, 50, made his comeback to take on the difficult task almost a year after stepping down under pressure from an unprecedented protest movement demanding a complete overhaul of Lebanon's political system.

The country is under huge international pressure to form a crisis cabinet of independents to address a plummeting economy made worse by the coronavirus pandemic and the devastating blast at the Beirut port on August 4.

Immediately after President Michel Aoun named him, the returning premier vowed to form a cabinet of experts, in line with conditions set by French President Emmanuel Macron to help rescue the corruption-ridden country from crisis.

Hariri said he would "form a cabinet of non politically aligned experts with the mission of economic, financial and administrative reforms contained in the French initiative roadmap."

"I will work on forming a government quickly because time is running out," he said, calling it the country's "only and last chance."

Cabinet formation is often a drawn-out process in Lebanon, where a complex governing system seeks to maintain a precarious balance between its various political and religious communities.

Hariri himself took eight months to hammer out his last cabinet after 2018 parliamentary elections.

His nomination was backed by a majority of 65 lawmakers, while 53 abstained from naming anyone during consultations with the president.

The parliamentary bloc of Hizbullah did not give the president a name of a preferred candidate, its representative said, but its main ally the Amal Movement supported Hariri's nomination.

Aoun warned Wednesday that Lebanon's third prime minister in a year would have to spearhead reforms and battle corruption.

He also accused unnamed officials of blocking reforms long demanded by international donors, including power-sector reform and a forensic audit of the central bank.

"If Lebanon does not carry out the reforms it needs, it's the country itself that risks breaking up," he said.

This is ridiculous, nothing will change if the same people responsible for corruption are coming back to power. They do not care about the Lebanese... after all this time they can only name Hariri again .. What BS

yes, its his new revolutionary look. he's been starving since all his dollars are abroad.

The reason Hariri is back is because he will not do anything about the looted money as he is the head of the snake. This is the last nail in the coffin of Lebanon. RIP in Lebanon!!

Hariri looks everyday more and more like Saddam during his trial in Baghdad. He could be ending his days metaphorically ¨hanged¨ by sectarian thugs like Saddam did.

That's all you need to know about the French plan!