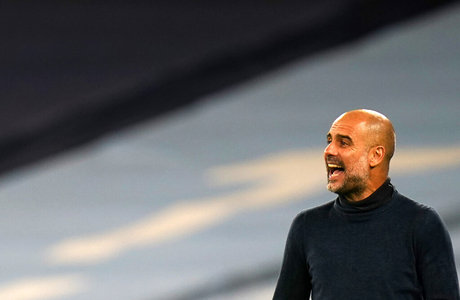 City have had a number of injury problems already this campaign and Guardiola believes that is down to the demands being placed on his side.

The season is being compressed into a shorter period than usual after the late finish to last term because of the coronavirus pandemic.

Guardiola takes his side to West Ham on Saturday in one of three away games for City in eight days, during a 22-day period featuring seven fixtures.

"The schedule is completely crazy for everyone, especially the teams that play in Europe," he told reporters on Friday.

"Right now I don't know my selection. We play tomorrow at 12:30 (1130 GMT), so not much recovery. Today the guys trained really well and tonight we will decide."

Guardiola is convinced the grueling schedule for teams in the Champions League and Europa League will put them in a difficult position when they try to challenge for domestic honors.

"This league always was so difficult and everyone can lose everywhere. The teams who have seven, eight days to prepare game by game, they have a huge advantage," he said.

"On the other side, the teams who compete to win titles and be on top, it is the way we have to live. If we cannot adjust or accept or handle this situation, you cannot be the manager or play in these teams."

Reports emerged earlier this week about talks over a "European Premier League".

Given his concerns over player burnout, Guardiola is unimpressed by the idea of adding more fixtures to the schedule.

"New competitions in Europe, they want to create new things, and always the same, just two or three weeks a year to rest," he said.

"For the players, this is the crazy, crazy situation for all of them."

Fernandinho was City's latest casualty after hobbling off during the 3-1 Champions League win over Porto on Wednesday with a leg injury.

Guardiola said after the game that the Brazilian would be out for four to six weeks, but he is now expected to return sooner.

"The injury is tough but yesterday the results were a little bit more optimistic, so I think it will be shorter than one month," Guardiola said.

Kevin De Bruyne and Aymeric Laporte missed the wins over Porto and Arsenal due to injuries, while Nathan Ake was also not part of the squad on Wednesday because of a groin issue.

De Bruyne and Laporte have returned to training, and when asked whether either of them or Ake would be involved on Saturday, Guardiola said: "Yes, some of them will be involved, some of them no."