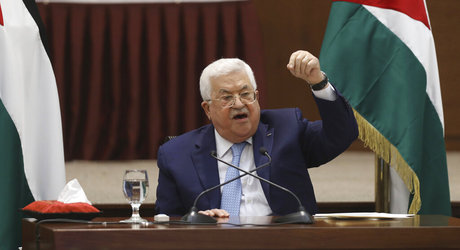 The Palestinian presidency on Friday said it "condemns and rejects" the normalization of ties between Israel and Sudan which was announced by U.S. President Donald Trump.

"The Presidency of the State of Palestine expressed today its condemnation and rejection of the deal to normalize ties with the Israeli occupation country which usurps Palestinian land," a statement said.

One of these years, the Palestinians may realise that Arafat and Abu Mazan (the "president" whose term of office ended over 10 years ago) refused to accept the fact that we are in the 21st Century and all the world, except their leaders, are looking forward.
On 29th November 1947 they refused to accept the establishment of an independent Arab State at the side of Israel, the leadership has been trying to persuade the inhabitants that they are in the right and that the whole world supports them. Events of the last couple of months have shown them that even the moderate Arab States are just giving up on them.
If they had established their state in 1948 together with Israel, there would have been no Palestinian refugee problem affecting Jordan, Syria, Lebanon and Egypt as well as those remaining in the territory that was intended for their independent state, there would instead have been a successful state filling its rightful place amongst the nations of the world.

Because we all know that ethnic cleansing, occupation, illegal settlements, discrimination are part of the 21st century!

For Pjilippo, moderate Arab states are those that do not have elections and in the case of Sudan blackmailed by the US to sign agreements with Israel in return for lifting crippling sanctions.

Harping back to the 1948 war is dishonest. The majority Palestinians were somehow expected to accept the loss of 55 percent of their homeland to a largely newly arrived Jewish minority - many of whom were illegally there. The Palestinians wanted a one state where everyone were all citizens are equal under the law.

Why is harping back to the 1948 war dishonest? What is dishonest is your ignoring the 1947 UN Resolution.
The partition of India in 1947 into two and then three independent states living side by side with each other on a religious basis has worked well, the split of Eritrea (Muslem) from Ethiopia (Christian) and South Sudan (Christian) from Sudan (Moslem) have worked well. Not to mention 16 independent states which were set up on the dissolution of the USSR.

The idea that only had the Arab accepted the division of Palestine, there would not be Palestinian refugees is ridiculous. These Zionists have long talked about and planned the transfer the population out. They even had ancomittee named the transfer committee. Even many municipalities whose populations did not resist the Zionist onslaught were depopulated and its its population never allowed to return.

Under international law, civilians are permitted to return home and their land and property are protected. Israel simply robbed them of their rights and stole their land, homes and property.

"Under international law, civilians are permitted to return home and their land and property are protected."
So why aren't you demonstrating in favour of all the property of the 800,000 Jews who were forced out of their homes in the Arab States between 1948 and 1956?
Or those of the millions of Indians "exiled" in 1947? Tibetans in India, Greeks in Cyprus,and many others.
I could go on and on, but I think that there is a common denomenator as to why you aren't mentioning them..........They are not Moslems, so you couldn't care less.

Between talking and actual action there is a wide gap.
Do you remember the Khartoum Resolution of the 3 Nos regarding Israel? So what happened on Friday? They established relations ignoring previous declarations.
At the outbreak of the 1948 war, the muezzins in the mosques, especially in the north, demanded that all the Moslems leave their homes and cross the border to Lebanon, as the Arab armies will crush the Jews, throw them into the sea and enable them to return home in just a couple of weeks. Guess what happened, many left, but many more remained. Look at the standard of living of those two different groups now.