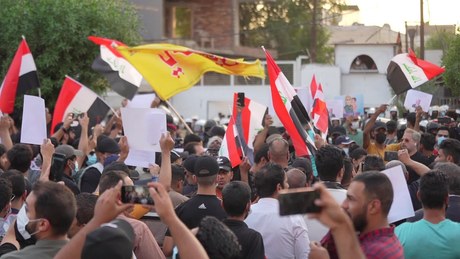 Dozens protested Monday outside the French embassy in Baghdad after a pro-Iran faction called on Iraqis to slam French President Emmanuel Macron's defense of cartoons depicting the Prophet Mohammed.

A cleric at the rally, Aqil al-Kadhemi, demanded an "apology to all Muslims because the Prophet is a symbol of Islam and Muslims" and visual depictions of him are strictly forbidden in Islam.

"We are demonstrating to denounce and strongly disapprove" of Macron's comments, Kadhemi told AFP at the protest that was heavily guarded by police.

"We're surprised that a country such as France, supposedly the bastion of culture and respect for others, continually disrespects more than 1.5 billion Muslims."

Macron has drawn anger in parts of the Muslim world with his robust defense of the right to mock religion following the murder of a French schoolteacher who had shown his class cartoons of the Prophet Mohammed.

Rabaa Allah, a pro-Iran faction formed in recent months which urged Iraqis to show up at the embassy, said "we are ready anywhere and anytime to answer back to those who tarnish our beliefs."

Earlier this month, supporters of Hashed al-Shaabi -- an Iraqi paramilitary network dominated by Iran-backed factions -- burned down the main Kurdish party's headquarters in Baghdad after criticism from a Kurdish ex-minister.

Some of the men in the small demonstration Monday burned a French flag and posters of Macron.

Several families and children held up placards with red crosses plastered on Macron's face and others of him bearing a pig's face.

"We denounce Macron who had the audacity to dishonor our blessed Prophet," said Aliaa al-Khafaji, a 40-year-old woman.

Other protesters called for a boycott of French products, like those already underway in supermarkets in Qatar and Kuwait and demanded by some in Jordan and Turkey.

Several dozen protesters also rallied in the Palestinian enclave of Gaza for a second day in a row.

A banner outside the French cultural institute there was torn down and replaced by images of Macron's crossed-out face and a poster stating "Our Prophet will be victorious".

These thugs are foolish, they have not understood the sacred value of fundamental freedoms and are obsessed by harmless funny caricatures as examples of freedom of expression, whether they depict cultural, political or religious symbols.