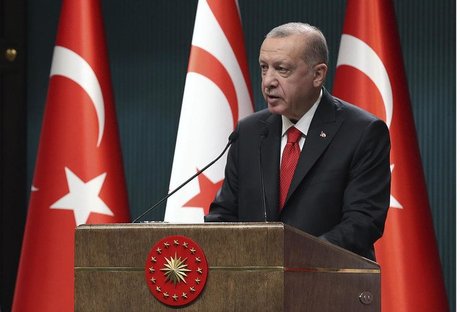 "Russia's attack on the training centre of the Syrian national army forces in the Idlib region shows it does not want lasting peace in the region," Erdogan said in a televised address.

A Russian war plane on Monday hit a training centre for Turkish-backed fighters in the northwestern Syrian province near Turkish border.

The Britain-based Syrian Observatory for Human Rights said the attack killed 78 fighters in the bloodiest surge in violence since a truce almost eight months ago.

Faylaq al-Sham is a Sunni Islamist group that has acted as Turkey's proxy during several Turkish military campaigns on Syrian soil, and has also been the source of pro-Ankara mercenaries sent to fight in Libya.

A truce at the start of the year brought an end to a Russia-backed Syria regime offensive that had killed more than 500 civilians and displaced almost one million people.

It was one of the worst humanitarian crises of Syria's nine-year civil war.

The last major rebel stronghold covers around half of Idlib province as well as slivers of adjacent provinces.

Erdogan now has "things going on" in Syria, Armenia, Libya as well as trouble with with Greece, Russia, France, EU and NATO. I hope for a more successful coup next time than in 2016.

The Turks who vote for ErDOGan must be the stupidest most idiotic and uneducated semblances of human beings that ever existed.