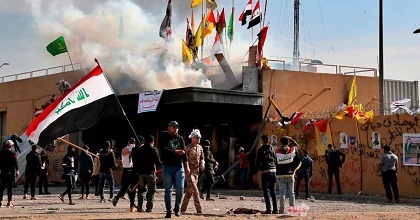 Iraq's pro-Tehran factions have welcomed Joe Biden's election as US president, alarming officials and activists in Baghdad who fear a US-Iran deescalation could empower hardliners in their own country.

Baghdad has long been caught in a tug-of-war for influence between its two main allies Washington and Tehran, made even more tense by outgoing US President Donald Trump's "maximum pressure" campaign against Iran since 2018.

"Trump's era was a very negative one, a period of demolition," said Mohammad Mohyi, spokesman for Kataeb Hezbollah, a hardline pro-Iran faction in Iraq.

"We hope the new administration will resolve this, by ending the crisis and withdrawing its troops," he told AFP.

He slammed Trump for "the greatest crime" in January: killing Iranian commander Qasem Soleimani and top Iraqi commander Abu Mahdi al-Muhandis, who had a key role in founding Kataeb Hezbollah, in a drone strike on Baghdad.

Outraged by that targeted attack, Iraq's parliament voted to oust all foreign troops from the country. Trump fired back with threats of crippling sanctions on Iraq.

Many hope there could be change.

"Perhaps choosing someone who relies on a policy of coordination could pave the way for cooperation among countries," said Nasr al-Shammary, spokesman for the Iran-aligned Harakat al-Nujaba.

Khamees al-Khanjar, an influential Sunni leader who aligned with Iran in the 2018 elections, agreed.

"Biden's win is a new opportunity with the world, to turn a new page towards stability and dialogue," he said.

Youssif, an Iraqi blogger who preferred not to give his full name, appeared disturbed by those reactions.

"Those politicians, who called the US 'evil' and raised the phrase 'Death to America,' congratulated Biden for winning the presidential election -- as if an old friend has won," he told AFP.

Tensions between Iraq and the US flared earlier this year, as rocket attacks against the US embassy multiplied.

Mustafa al-Kadhemi, who took the reins as prime minister in May, has tried to repair ties and met Trump and top administration officials in Washington in August.

During the visit, Kadhemi also met Democratic House Speaker Nancy Pelosi, which his advisers told AFP was a way to "open the door" in case of a Biden win.

Little is known about Biden's planned foreign policy agenda, although he has a legacy as one of the most senior Democrats to vote in favour of the 2003 Iraq invasion that toppled Saddam Hussein.

He has personal ties with some of Iraq's current leaders, including President Barham Saleh, who, in congratulating Biden on his victory, called him "a friend and trusted partner".

Kadhemi congratulated the president-elect too, but some Iraqi officials told AFP there were worries pro-Iran factions could be "emboldened by a Biden presidency," spoiling the prime minister's plans to rein them in.

Some feared Biden would extend a diplomatic olive branch to Iran, reviving the nuclear deal agreed under ex-US President Barack Obama -- when Biden was vice president.

They characterise that period as one in which Iran was able to expand its influence across the region.

But some expect Iraq will not feature among the incoming president's priorities, given pressing domestic crises in the US itself.

Like many foreign networks, Iraqi television channels offered days of round-the-clock coverage of the tight US presidential race -- but reactions on the streets have been muted.

In Baghdad's Tahrir Square, the epicentre of anti-government protests that erupted in October last year, people gathered for a planned rally and seemed unmoved by Biden's win.

"As an Iraqi, I prefer that Trump stays in power," said 74-year-old Abu Saad.

But more broadly, he told AFP, "Iraqis don't see that a change in leaders will lead to a change in policy."

"We hope help comes to Iraq, which is going through an economic and political crisis and will hold its own elections," set for June 2021, she said.

But with more than two months to go until Biden is sworn in, some Iraqis say Trump remains as much of a wild card as ever.

"Trump acts in an unpredictable way, and he might use this transitional period to target our leadership," Kataeb Hezbollah's Mohyi said.

Two Iraqi officials said they expected the outgoing administration to release a "bucket list of sanctions" against Iranian interests in Iraq before handing over the White House.

"Trump's going to up the ante," one of them said.

"I doubt there could be military action, but I wouldn't be totally surprised."

Wow judging by ever other iranian infiltrated countries they have a lot to look forward to!!....yemen, syria, Lebanon,(thankfully Bahrain was saved)let alone the wonderful progress Iraq has made with irans 'help'. Blind sheep on yet another iranian road to nowhere but misery and suffering.