With Erdogan's Phone Pal Trump out, Turkey Worries about Biden 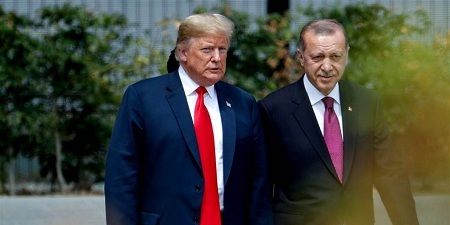 With Joe Biden, Turkish President Recep Tayyip Erdogan will probably be unable to influence US policy with a simple phone call, as he had occasionally done with Donald Trump.

But that does not mean the US president-elect will push Turkey away, instead hoping to re-engage the geographically strategic and militarily powerful NATO ally on tougher terms, analysts say.

Once smooth, US-Turkish relations suffered from the failed overthrow of Erdogan in 2016, blamed on a US-based Muslim preacher that Turkey has unsuccessfully sought to have extradited.

The two countries are also at loggerheads over the US support of a Kurdish militia in the fight against the Islamic State group in Syria.

Yet the personal bond between Trump and Erdogan -- similar to one the mercurial White House chief enjoyed with a small group of other strong-willed world leaders -- helped mitigate much of the damage.

Now, with Trump on the way out, "Erdogan has a reason to be anxious," Middle East Institute analyst Gonul Tol wrote in a research note.

"I don't think the Biden administration will be as indulgent of Turkey, in Syria and elsewhere," added Sam Heller, an independent analyst on Syria.

More than two days after Biden's victory was called by US media, Turkish officials remained conspicuously silent, saying they would only comment once the results were "official".

"Under a Biden administration, relations between Washington and Ankara will undoubtedly kick off with tension and apprehension on both sides," Asli Aydintasbas of the European Council on Foreign Relations (ECFR) wrote.

A bit where he called Erdogan an "autocrat" went viral in August, drawing vocal condemnation from Ankara.

Biden also suggested the US "embolden" opposition figures to allow them "to take on and defeat Erdogan".

Turkish officials nonetheless insist they will work with any US administration.

Turkish media have also speculated that, sensing his victory, Ankara contacted Biden's team before the vote.

Even under Trump, the relationship was strained over the eastern Mediterranean, where Ankara is hunting for natural gas in waters claimed by Cyprus and Greece.

US Secretary of State Mike Pompeo visited Greece in September to show support for Athens.

"Ankara fears Biden might cultivate even closer ties to Greece and get even tougher on Turkey," Tol said.

And when Ankara kept a US pastor accused of espionage under arrest, Trump struck back at the Turkish economy, plunging the country into a currency crisis that wiped out people's savings in 2018.

But Trump avoided calling attention to Turkey's deteriorating record on human rights or highlighting its treatment of the Kurdish minority.

Biden could "reintroduce a democracy and human rights promotion discourse into the bilateral relationship," Aydintasbas said.

And with a less isolationist outlook, Biden could try to curb Ankara's assertive foreign policy, which includes a military intervention in Libya and a diplomatic push into the flaring conflict in Nagorno-Karabakh.

"Ankara worries that Biden will try to constrain a resurgent Turkey," Aydintasbas said.

One of the most immediate questions is whether Biden will sanction Turkey for buying a high-tech Russian air defence system that the Pentagon has condemned.

Although sanctions have bipartisan support in Congress, Trump took the less punitive step of cutting Turkey out of the US F-35 stealth fighter jet programme.

Turkey defiantly tested the Russian system just weeks before the US vote.

"A Biden administration will likely have the same concerns as the Trump administration -- that imposing sanctions on Turkey will alienate a still important NATO ally," Aydintasbas wrote.

Similarly, Trump backed Erdogan over Turkey's state-run Halkbank, which US prosecutors suspect of participating in a multi-billion-dollar scheme to evade sanctions on Iran.

A Manhattan federal judge will start hearing the case in March, and Erdogan has reportedly pressed Trump by phone to quash the Halkbank investigation, using the same direct line he used to influence US policy on Syria.

But "in the long run, the Biden administration will be more beneficial to Turkey," said Yetkin.

"Biden is an experienced politician, he will behave more rationally and his actions will be more predictable."