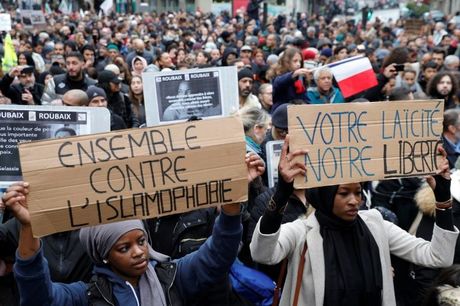 Home to Europe's largest Muslim population, France is often accused of being "against" Islam because of its ban on the burqa and religious symbols such as headscarves in schools.

But defenders of French secularism say this is a fundamental misreading of laws which aim to keep religion out of public life.

They insist that France not only protects freedom of religion, but guarantees freedom from it.

- Where does it come from? -Secularism's roots go back to French Revolution of 1789. Enlightenment thinkers felt reason and universal values had to be protected against intolerance and obscurantism.

The 19th century saw a battle between the "two Frances", with secular republicans struggling to contain the power of the dominant Catholic church.

- The Black Hussars -After 1862, when education became free and secular, that battle became a culture war.

Secular schoolteachers -- nicknamed the "Black Hussars of the Republic" after their black coats -- took on the Catholic clergy for the hearts and minds of every village in France.

- It's the law -Church and state were formally separated by a 1905 law which became the bedrock of French secularism. It guarantees religious freedom -- as long as religion does not threaten public order -- but confines it to the private sphere.

- Is it only French? -No, it has influenced many countries including Mexico, where secularism was also used to counter the power of the Catholic church.

But it was most whole-heartedly taken up in Muslim-majority Turkey by its modern founder Ataturk. Turkey's strongman Islamist president, Recep Tayyip Erdogan, has spent much of his 17 years in power trying to roll that back.

- Religious revival -French secularism has been on the defensive since the late 1980s with the emergence of identity politics, Christian and Jewish revivalism and most of all, radical Islam, given the large influx of Muslims from its former colonies since the 1950s.

In 2004 "the wearing of conspicuous religious symbols or garb" was banned in state schools. It became known as "the French headscarf ban" abroad although it applies to symbols of all religions.

The ban was later extended to many public buildings and to parliament.

- French exceptions -Despite it strict secularism, French school holidays still mostly follow the Christian calendar, with Catholic saints days getting a mention in weather forecasts. Secular laws do not apply to the eastern borderlands of Alsace Lorraine, where Christian and Jewish clerics are paid by the state, as in neighbouring Germany.