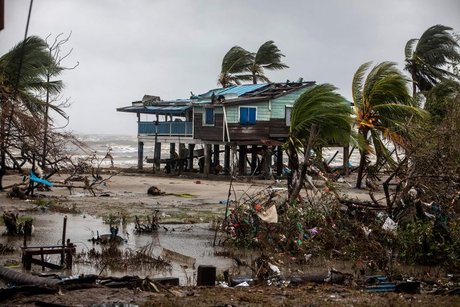 Iota, which made landfall in Nicaragua as a "catastrophic" Category 5 hurricane Monday, left six dead in Nicaragua, two of them children who were trying to cross a river in the southern part of the country.

Another two people died in the Colombian Caribbean archipelago of San Andres, Providencia and Santa Catalina, as well as one woman in the indigenous community of Ngabe Bugle in Panama, where 2,005 people remained in shelters even as rains began to ease there.

By late Tuesday Iota had weakened from a hurricane to a tropical storm with maximum sustained winds of 50 miles (80 kilometers) per hour, according to Francisco Argenal, the head of meteorology for the Honduran civil protection service (Copeco).

Argenal told AFP that Iota crossed into Honduras over the eastern department of El Paraiso and passed 35 miles south of the capital Tegucigalpa.

He predicted the storm would reach El Salvador by early Wednesday morning.

The Honduran government ordered the country's main roads closed until Wednesday due to the risk of overflowing rivers.

Iota became the only Atlantic hurricane this year to reach Category 5 status -- the maximum level on the Saffir-Simpson wind scale -- soon before it made landfall in Nicaragua on Monday evening.

"The wind is too strong," Jessi Urbina, a resident of the badly damaged El Muelle neighborhood in Bilwi, Nicaragua, told AFP.

"It took everything: the wooden roof and the windows of my house, which is made of concrete."

The area was without power and telecommunications services, according to provider Telcor. Trees were downed and roofs ripped off houses, including one hotel, said the disaster agency Sinapred.

Authorities had rushed to evacuate thousands of people from coastal areas of Nicaragua and Honduras in the immediate path of the storm.

Colonel John Fredy Sepulveda, the police chief on Providencia, said the local hospital had lost part of its roof and the territory of around 6,000 people was without power.

Rescuers in the Honduran community of Tocoa helped evacuate hundreds of people who were left trapped by the rising waters of the Aguan River, which had overflowed its banks and flooded several homes.

In Nueva Jerusalen, winds had destroyed the roof of a health center, damaged at least 38 homes and uprooted trees, according to Copeco.

Hurricane Eta made landfall in the same area as a Category 4 hurricane in early November before easing to a tropical storm, bringing widespread flooding and landslides that left 200 people dead.

Prinsila Glaso, 80, told AFP on Monday that her community south of Bilwi had been "destroyed" in the wake of Eta, and worried Hurricane Iota would leave little behind.

The Atlantic has seen a record storm season this year with 30 named storms and 13 hurricanes.

Shelters in Nicaragua -- already stretched by those made homeless by Eta -- were overwhelmed by new arrivals, Eufemia Hernandez, coordinator of a center at Uraccan University, told AFP.

El Salvador and Panama declared a "red alert" ahead of the hurricane's projected path through Central America. Neighboring Guatemala, with vast areas still recovering from Eta, was also on high alert.

Local media reported that more than 175,000 people had been evacuated since Saturday, mostly in areas previously flooded by Eta.