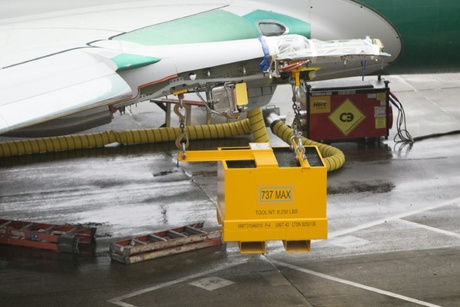 U.S. regulators on Wednesday cleared the Boeing 737 MAX to return to the skies, ending its 20-month grounding after two fatal crashes that plunged the company into crisis.

The Federal Aviation Administration said the approval followed "an unprecedented level of collaborative and independent reviews by aviation authorities around the world."

In a video that accompanied the announcement, FAA Administrator Steve Dickson said he was "100 percent comfortable" with having his family fly the jet. Dickson piloted test flights during the approval process.

The plane was grounded after two crashes that killed a total of 346 people in 2018 and 2019. Both Boeing and the FAA have come under fire in the wake of the crisis, with critics saying Boeing sacrificed safety for profit and that FAA was too deferential to the private giant.

A principal cause of the two crashes was identified as a faulty safety system that was supposed to keep the plane from stalling as it ascended but instead forced the nose of the plane downward.

Boeing applauded the FAA's action as an "important milestone" in the company's journey to restoring its reputation and safely returning the jet to service.

"We will never forget the lives lost in the two tragic accidents that led to the decision to suspend operations," said Boeing Chief Executive David Calhoun.

"These events and the lessons we have learned as a result have reshaped our company and further focused our attention on our core values of safety, quality and integrity," Calhoun added.

The FAA announcement lifted shares of Boeing, which replaced its chief executive and several other top executives in the wake of the crisis. Boeing has also been slammed by a downturn in commercial plane travel due to the coronavirus pandemic.

But family members who lost loved ones in the crashes blasted the decision, according to a statement from Clifford Law Offices, which is representing the families in litigation.

"The aggressive secrecy of the FAA means we cannot believe the Boeing 737 MAX is safe," said Michael Stumo, whose daughter died in an Ethiopian Airlines crash of the plane in March 2019.

"We were told the plane was safe when certified in March 2017 and again after the Lion Air crash in October 2018. 'Just trust us' does not work anymore." That was the first of the two crashes, off the coast of Indonesia.

To garner federal approval, Boeing made changes to the Maneuvering Characteristics Augmentation System (MCAS), the anti-stall system that activated improperly in the Lion Air and Ethiopian Airlines flights.

Dickson, in an interview with CNBC, said the changes to the jet "makes it impossible for the airplanes to have the same kind of accidents."

Dickson also insisted that the FAA had "reset" its relationship with Boeing and that agency employees who in the future challenge Boeing will have support from higher-ups at the regulator.

For Boeing, the FAA announcement creates a pathway to begin to deliver some 450 MAX planes that were already built, but were put in storage throughout the crisis.

Plane deliveries are tied to company revenues. Boeing has reported losses the last four quarters and the MAX crisis has cost the company some $20 billion in production expenses and compensation to airlines.

American Airlines has said it plans to begin service on the MAX at the end of December for service in between New York and Miami.

The FAA still must approve pilot training protocols for individual airlines before the MAX can return to service.

Also, international regulators must sign off on the MAX before it can fly outside the U.S.

Transport Canada said it worked "extensively" with the FAA, but that it would require additional steps on pilot training and pre-flight procedures beyond what the U.S. agency mandated for the American skies.

"We expect this process to conclude very soon," the Canadian agency said.

"The commercial flight restrictions for the operation of the Boeing 737 MAX aircraft in Canadian airspace remain in effect and will not be lifted until the department is fully satisfied that all its safety concerns have been addressed."

Boeing also still faces a number of investigations and lawsuits connected to the crashes.

A report released in September from a House panel called the crashes "the horrific culmination of a series of faulty technical assumptions by Boeing's engineers, a lack of transparency on the part of Boeing's management, and grossly insufficient oversight by the FAA."

Shares of Boeing shot up early Wednesday, rising 5.3 percent to $221.28 in early trading.

I just see the post i am so happy the post of information's. So I have really enjoyed and reading your blogs for these posts. Any way I’ll be subscribing to your feed and I hope you post again soon.your website article is so unique and good and This is my News feeds website please click here to visit my website and please support me Hindi Times.co.in