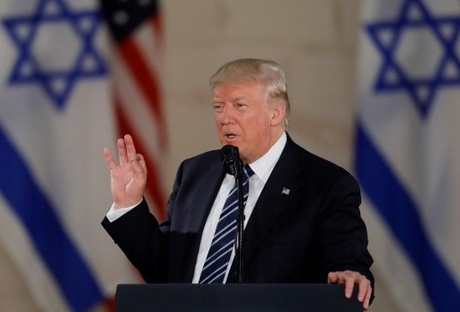 Mike Pompeo is expected to become the first U.S. secretary of state ever to visit land used by settlers in the Israeli-occupied West Bank on Thursday.

The expected visit to the Psagot winery would be another dramatic break by the Trump administration with the international community -- which sees such settlement enterprises as illegal -- and the traditional U.S. line on the Middle East conflict.

Coming in the dying weeks of Donald Trump's presidency, it is further proof of his whole-hearted support for Israel.

Weeks after entering the White House, Trump says the U.S. no longer supports a two-state solution as he welcomes Israeli Prime Minister Benjamin Netanyahu to Washington on February 15, 2017 for the first of many visits.

In March his ambassador to the U.N., Nikki Haley, says "the days of Israel-bashing at the U.N. are over."

Two months later Trump visits Israel and Bethlehem in the West Bank, becoming the first U.S. leader to pray before the Western Wall in the occupied Old City.

In September, the U.S. ambassador to Israel causes an outcry by referring to the "alleged occupation" of the Palestinian territories.

Trump sets off a diplomatic earthquake on December 6 by unilaterally recognizing Jerusalem as the capital of Israel.

The move is roundly condemned by the international community. The Palestinians have long hoped to make east Jerusalem -- occupied by Israel since the 1967 Six-Day War -- the capital of their new state.

The same day at least 60 Palestinians are killed by the Israeli army during protests in Gaza, the bloodiest day there since the 2014 war.

Palestinian president Mahmud Abbas says the Washington is no longer "fit" to be a honest broker in the Middle East.

The U.S. says it will no longer fund the UN Relief and Works Agency for Palestine Refugees (UNRWA) on August 31, a week after cutting $200 million (170 million euros) in aid to the Palestinians.

Trump recognizes the Israeli annexation of the Golan Heights, which it captured from Syria in 1967. He signs the decree alongside Netanyahu at the White House on March 25, 2019.

The move is condemned by the international community, which does not recognize the land grab, while Syria calls it a "blatant attack" on its sovereignty.

On November 18 the U.S. says it no longer regards Israeli settlements on the occupied West Bank illegal.

Standing alongside Netanyahu, Trump unveils his new Middle East plan at the White House on January 28, 2020.

It allows the Jewish state to annex key parts of the West Bank, with Jerusalem as Israel's "undivided" capital.

The United Arab Emirates and Bahrain normalize diplomatic relations with Israel amid great fanfare at the White House on September 15.

Abu Dhabi says the agreement would suspend the annexation of the West Bank but Netanyahu insists any suspension would be only temporary.

The Palestinians say they have been "stabbed in the back" by their old Arab states allies.