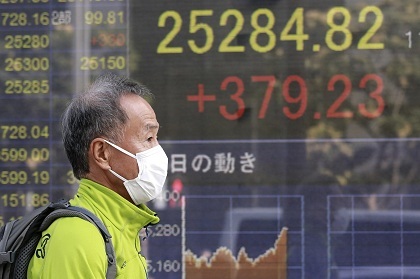 Stocks mostly retreated Thursday as a global rally fuelled by vaccine optimism petered out owing to the brutal reality of surging infections that are forcing fresh lockdowns and threatening to shock the global economy again.

While the broad consensus is that 2021 will see a healthy recovery across the world as people are gradually inoculated, traders are focusing on the immediate crisis as the US and Europe suffer a new wave of the killer disease.

"After the soaraway gains of the past two weeks, equities now look much more richly-valued, and thus vulnerable to an outbreak of bad news," said Chris Beauchamp, chief market analyst at IG trading group.

"This is precisely what we got in the form of spreading infections in the US but also in Japan, a worrying sign indeed for a country that had been successful earlier in the year in controlling the spread.

"Even reports of success for AstraZeneca's new vaccine were not enough -- the impact of these vaccine announcements having been on a declining trend since the first, excitedly-received news from Pfizer almost three weeks ago," Beauchamp added.

World markets have enjoyed an impressive run in November thanks to Joe Biden's US election victory and then news that two vaccine candidates had shown to be more than 90 percent effective in late trials.

The announcements lifted hopes that the planet can begin to get back to some form of normality soon.

The move indicated that the soaring number of new cases around the US -- the country has registered more than 100,000 every day for two weeks -- could force lockdowns similar to those that battered the economy earlier this year.

Key European economies including France, Germany and Britain have already imposed new or partial lockdowns, while other countries around the world including Japan and South Korea have been forced to take new containment action.

European Central Bank chief Christine Lagarde on Thursday called for the EU's planned coronavirus recovery fund to become available "without delay", after Poland and Hungary blocked the adoption of the plan.

The appeal came ahead of a videoconference by EU leaders set to be dominated by the budget row, which threatens to hold up the unlocking of badly needed stimulus to cushion the economic hit from the pandemic.

It comes as Washington has yet to agree on a massive new stimulus package for the United States.