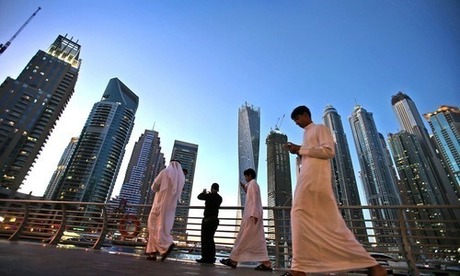 The United Arab Emirates, a Gulf powerhouse home to millions of foreign residents, has revamped an array of laws in a social liberalization drive designed to burnish its progressive brand.

It even took the historic leap of normalizing ties with long-time Arab foe Israel, after years of signaling the importance of religious co-existence.

Now it has turned its attention to conservative local laws, rarely enforced but much discussed among expatriates wary of falling foul of authorities and jeopardizing their jobs and residency.

As it takes on a more prominent role in global diplomacy, the UAE is seeking to bolster its image as a safe hub in a region often plagued by extremism.

Earlier this month it announced the scrapping of reduced sentences for so-called "honor" killings, most victims of which are women seen as having brought shame on their families.

Other sweeping changes flagged in the media include the lifting of a ban on unmarried couples living together, eased restrictions on alcohol consumption, and the decriminalization of suicide.

The reforms appear designed to attract more talent and reinforce the country's position amid slumping oil prices and the coronavirus downturn.

The overhaul is part of efforts to highlight "tolerance... and strengthen the country's position" as a desirable place to live and work, according to the official WAM news agency.

"This is the best news this year since the deal with Israel," said one Emirati political expert close to government circles.

"It plays well into our image, but the main idea is to make people's lives easier. This is the main goal," he told AFP, on condition of anonymity as the laws have yet to be published in detail.

It is yet to be seen whether the new legislation will affect other restrictive yet rarely implemented laws including bans on homosexual behavior and pregnancy out of wedlock.

Nevertheless, many expats took to social media to also welcome the changes in the glitzy country, best known for its palm-shaped islands, over-the-top hotels and mega malls.

"Living with a long-term partner, there always used to be an element of concern about getting found out and ending up in trouble," one 32-year-old British expat told AFP.

"The same thing goes for alcohol consumption. My religion permits me to drink and while the consumption law wasn't enforced -- at least not to my notice -- there was always an element of hesitation there as well."

While "honor" crimes were extremely rare in the country and residents seldom prosecuted for cohabiting or drinking without a liquor license, the move is a significant step in a tightly controlled but increasingly socially liberal country.

The UAE has spearheaded efforts to fight "political Islam", for which it has an zero-tolerance policy. Unlike its neighbors, it has long controlled religious rhetoric in its mosques and media. Political protest is virtually non-existent.

The modernization project comes as a new US administration prepares to replace President Donald Trump, who had forged a close relationship with Gulf governments which are now warily eyeing the new environment.

President-elect Joe Biden has promised to reevaluate Washington's relationships with its Gulf allies and to shed more light on rights issues that have been overlooked by Trump.

The new laws reflect "liberalism and tolerance that the UAE has wanted to project all along," said Dorsey.

"Of course, this comes in anticipation of a Biden administration and the concern that it may look more critically at countries like the UAE."

What about freedom of speech? What about allowing the citizens to vote for who they want as leader?

Honor killings are not "political Islam", it has nothing to do with islam whatsoever. And how can the UAE fight "political islam" when it supports "political wars and bigotry" that suit them?