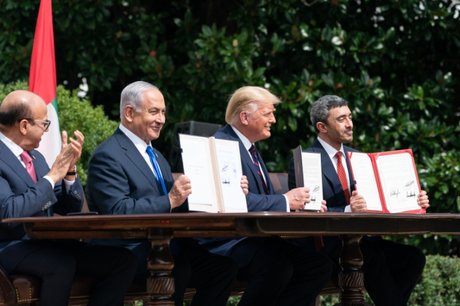 Speculation is mounting that Israel and Saudi Arabia may be about to normalise ties after Prime Minister Benjamin Netanyahu reportedly held secret talks in the kingdom.

If a deal is done, Saudi Arabia would become the sixth Arab nation to recognise Israel after historic accords since September with the UAE, Bahrain and Sudan.

We look at the Jewish state's turbulent history with its Arab neighbours with whom it has fought no less than eight wars.

Israel is created on May 14, 1948 on parts of British-mandated Palestine three years after the end of World War II, when the Nazis killed more than six million Jews.

It immediately comes under attack from its Arab neighbours, but repels them.

More than 760,000 Palestinians are either driven from their homes or flee, becoming refugees.

In 1956, Israel attacks Egypt with Britain and France over the nationalisation of the Suez Canal. All three are forced to withdraw by the United States and the then-Soviet Union.

In June 1967, Israel wins a crushing victory over its Arab neighbours in the Six-Day War, seizing the West Bank and east Jerusalem from Jordan, the Golan Heights from Syria and the Gaza Strip and Sinai Peninsula from Egypt.

In 1973, Egypt and Syria launch a surprise attack on the Jewish holiday of Yom Kippur but are held off despite initial advances.

A second peace accord, with Jordan, comes in 1994, formally ending 46 years of war between the two neighbours.

It ends in 1993 when Israel agrees to limited Palestinian autonomy in the West Bank and Gaza Strip as an interim step towards a comprehensive peace agreement.

The so-called Oslo accords are sealed with a historic handshake between Palestinian leader Yasser Arafat and Israel premier Yitzhak Rabin, who is later assassinated by a Jewish extremist.

The Israeli army reoccupies much of the West Bank and begins building a separation barrier that cuts deep into occupied territory.

In 2005, Israel withdraws all troops and settlers from Gaza after 38 years of occupation.

It imposes a crippling blockade on the strip after Islamist group Hamas seizes control in 2007.

Israel launches three deadly offensives against Gaza in six years, the latest in 2014.

In December 2017, US President Donald Trump recognises Jerusalem as Israel's capital, a declaration condemned by the Palestinians who regard east Jerusalem as the capital of their future state.

In March 2019, Trump recognises Israel's 1981 annexation of the Golan Heights.

On January 28, 2020, Trump unveils a controversial Middle East peace plan that would pave the way for Israel's annexation of swathes of the West Bank.

In a surprise announcement in August, Trump says Israel and the United Arab Emirates have reached an "historic" agreement to normalise ties.

Israel agrees to "suspend" annexation of parts of the occupied West Bank, without saying for how long.

On September 11, Trump announces that Bahrain and Israel will also normalise ties.

The Palestinians condemn the accords as a "stab in the back".

On October 23, Sudan normalises ties as Trump agrees to take it off a US sanctions blacklist of states which allegedly sponsor terrorism.

A peace deal with Riyadh, which has said it would stick to the decades-old Arab League position of not having ties with Israel until its conflict with the Palestinians is resolved, would be a massive diplomatic prize for the Jewish state.

First thing they want to do is make money off the Arabs... Typical