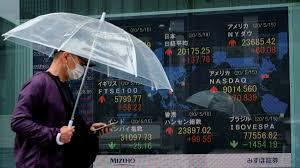 Stock markets mostly rose Tuesday as news that Donald Trump's team will now work with Joe Biden ahead of his inauguration built on optimism that vaccines could soon be rolled out around the world.

However, the mood on trading floors continues to be tinged by surging virus infections and deaths that have forced governments to impose or consider reimposing economically painful containment measures.

"Signs of movement in the US political deadlock have combined with the steady drip of vaccine news to underpin" stocks, commented Chris Beauchamp, chief market analyst at IG trading group.

Nearing the half-way mark in Europe, London's benchmark FTSE 100 index was up by 1.1 percent, with airlines boosted by news that England will loosen its quarantine rules for travellers from abroad.

Frankfurt's DAX 30 added 1.0 percent, as investors reacted also to data showing that Germany's economy grew by a better-than-expected 8.5 percent in the third quarter.

Earlier in Asia, Tokyo soared more than two percent as investors returned from a long weekend, while Sydney was more than one percent higher.

Hong Kong could only eke out a small rise after a local spike in coronavirus infections forced leaders to consider imposing fresh containment measures.

The dollar fell against the euro, pound and yen, while oil prices climbed.

While the broad consensus has been that Trump would eventually admit defeat, there have been concerns about his refusal to allow Biden to begin work on pandemic response measures and national security matters.

"Both have the same views on jobs; they have witnessed policy mistakes like taper tantrum and gnarly market impacts of early rate hikes.

"There will be a mutual agreement for lower for a very, very long time. And that cohesion will be good for the market in general," Innes added.

Wall Street indices rose on Monday, helped in part by data that showed a forecast-beating rise in activity in both the US services and factory sectors in November.

But while the long-term outlook brightens, countries from the US, across Europe and increasingly in Asia are reporting a rise in infections. And with the northern hemisphere winter approaching there are warnings of worse to come.

"Sadly, the next few months are likely to see the worst of the pandemic in cases and fatalities," noted David Kelly of JP Morgan Asset Management.

Kelly warned the US economy faced further pain if lawmakers did not agree on a new stimulus soon, with Republicans refusing to give way to Democrat demands for a multi-billion-dollar package.