Aoun: No International Assistance for Lebanon without Forensic Audit 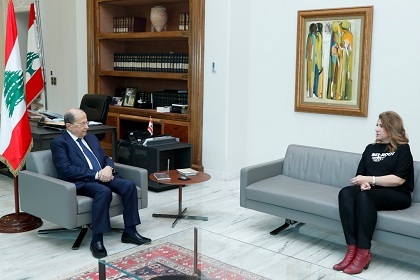 President Michel Aoun assured on Wednesday that his request for parliament intervention to enable a forensic audit into the Central Bank’s accounts is “distant from any political conflicts,” the Presidency press office quoted Aoun in a tweet.

“The letter to parliament on forensic audit is completely independent from political conflicts because it is aimed at addressing a major national tragedy,” Aoun said during a meeting with caretaker Justice Minister Marie-Claude Najm.

The President indicated that “without solving the issue of forensic audit, Lebanon can not agree with countries wishing to assist it, nor with the IMF or any similar financial body.”

“It is a national matter by excellence, and it’s the best way to steer out of the crisis,” added the President, urging media outlets to handle this issue “responsibly.”

Media reports said that reaching out for a parliament intervention, Aoun -- founder of the Free Patriotic Movement-- seeks to retaliate against Speaker Nabih Berri’s call for a parliament meeting to discuss a new electoral law held Wednesday.

The two Christian parties, the FPM and Lebanese Forces, criticized the timing of Berri’s call. They said it came "inappropriately at a time when the country is in deep crisis."

God bless Shia appointed Christian President Michel Aoun for stressing on forensic audit that is completely independent from political conflicts after 4 years of becoming president. The president just like our Sayid and Marja' was shocked to learn the Lebanese central bank was orchestrating financial instruments that led to the occurring collapse.

The problem with a forensic audit is that it will likely uncover embarrassing and criminal activity by high level politicians and their supporters. They powerful politicians will likely preclude an audit that uncovers such findings.

Aoun is a talker, not a doer. He has been talking about a lot of things during his tenure, but every year, economy gets worse, corruption goes up, and transparency goes down. He can go around blaming others (the usual route), but bottom line, he hasn't been able to do anything and he is on his 6 government in 5 years on his watch.

He has to take some responsibility in order to save what little of his prestige and honor are left. History will not be kind to him at this point in time.

He doesn’t have prestige nor honour. Never did, never will.