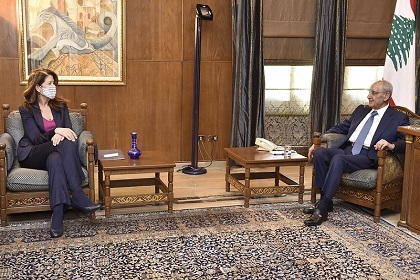 The meetings come after the postponement of this week’s round of negotiations between Israel and Lebanon over their disputed maritime borders, which are being held under the auspices of the U.S. and the U.N.

A Lebanese official confirmed that the talks have been postponed until further notice. The official did not give a reason for the postponement and also did not elaborate. An Israeli official meanwhile said the American mediators "decided to focus on dialogue between the two sides at the moment, in order to prepare the ground for the next round of talks."

Separately, Berri asked the parliamentary committees of finance and budget, administration and justice, national economy and planning, public health, and labor and social affairs to hold a joint session at 10:30 am Wednesday to “study the issue of subsidization and obligatory reserves.”

Media reports have quoted an official source as saying that the central bank is studying lowering the threshold for obligatory foreign exchange reserves in order to continue subsidizing key imports next year.

God bless Shia Parliament Speaker Nabih Berri for finally agreeing to meet with U.S ambassador to Lebanon Dorothy Shea and admonishing the U.S government for its useless sanctions against honest Lebanese and Iranian politicians. Our parliament speaker should expose the corruption eating away at U.S institutions including Congress and the Senate.