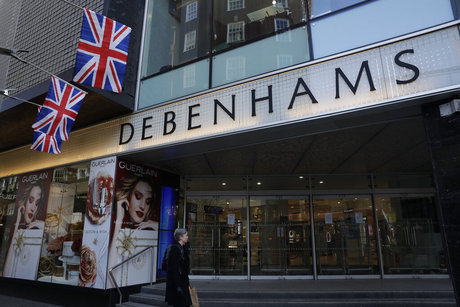 British department store chain Debenhams said it was set to close for business save for an unlikely rescue, meaning around 12,000 jobs were set to go.

The business, which had been struggling long before the pandemic, made its announcement after British clothing retailer Arcadia fell into administration late Monday, putting at risk a further 13,000 roles.

The news comes on the eve of England exiting a second lockdown which has battered in particular the nation's retail and hospitality sectors.

Debenhams, whose history dates back to the late eighteenth century, said in a statement that it would continue to trade through its 124 UK stores and online to clear stock after retailer JD Sports pulled out of rescue talks.

"On conclusion of this process, if no alternative offers have been received, the UK operations will close," it added.

Debenhams, which has already been shedding thousands of jobs ahead of and during the pandemic, currently employs around 12,000 staff -- mostly being paid by the government under its Covid furlough scheme.

"All reasonable steps were taken to complete a transaction that would secure the future of Debenhams," said Geoff Rowley, one of the administrators acting on behalf of the group.

"However, the economic landscape is extremely challenging and, coupled with the uncertainty facing the UK retail industry, a viable deal could not be reached."

Debenhams collapse comes as the future of Arcadia hangs by a thread.

Arcadia, which owns a number of brands including Topman, Evans and Wallis which sell also in Debenhams' stores, blamed its tumbling into administration largely on coronavirus fallout.

However like Debenhams, Arcadia has struggled to adapt from a bricks-and-mortar business into an leading online company.

"The Arcadia story is a tragic one, I'm not going to criticize any individual but there's been a lot of reporting that points out some of the missteps by the management there," the key ally of Prime Minister Boris Johnson told Sky News.

"We know more broadly, to be fair, that the high street is facing unprecedented pressure, significant part of that of course is Covid."

"A nightmare before Christmas is unfolding for 25,000 employees who will lose their jobs if buyers are not found for parts of both businesses," said Susannah Streeter, senior investment and markets analyst at Hargreaves Lansdown.

"Arcadia group's collapse has set off a domino effect, with JD Sports pulling out of talks to buy Debenhams.

"Arcadia is the biggest concession operator in Debenhams and so its collapse into administration clearly put the frighteners on management," Streeter added.

Arcadia owner Philip Green -- once dubbed "the king of the high street" -- already saw his reputation severely hit by the high-profile collapse of UK retailer BHS four years ago.

Having sold it for just £1 to Dominic Chappell, a former bankrupt businessman with no retail experience, BHS then collapsed one year later, resulting in 11,000 job losses and leaving a massive deficit in its pension fund.

British lawmakers on Monday called on Monaco-based Green to cover the shortfall in the Arcadia pension fund, which is estimated to run as high as £350 million ($460 million, 385 million euros).

Green, whose net worth was estimated at £930 million on this year's Sunday Times Rich List, last year paid £363 million to plug the gap in the BHS pension scheme.