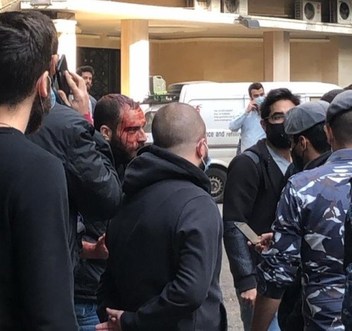 Several people were wounded Wednesday in a brawl at the Huvelin campus of the Saint Joseph University (USJ) in connection with the ongoing student elections at the university, the National News Agency said.

The clash had first erupted Tuesday between a group of students, reportedly belonging to Hizbullah and the Lebanese Forces.

The Internal Security Forces quickly intervened on both days to contain the situation.

Al-Jadeed TV said two people were “stabbed with knives” and rushed to hospitals and that calm has since been restored.

In a statement, the LF media department accused an “agitated political group” of attempting to “distort the course of the electoral process” due to “students’ general mood, which is against its policies and practices.”

“We were surprised this morning by the arrival of groups who don’t belong to the university, who were armed by sticks, knives, stones, sharp objects and flares and who sneaked through Ashrafieh’s streets, as if it was a combat arena, not an arena for education and culture,” the LF said.

“They attacked the students in an attempt to scare them and intimidate them and to undermine the electoral process,” the LF added.

It noted that security forces have so far arrested three of the attackers.

Kataeb Party chief Sami Gemayel meanwhile tweeted that “the attack of Hizbullah members against USJ students proves how much this group does not respect democracy and the principle and outcome of elections.”

“No wonder they reject early (parliamentary) elections and are seeking to torpedo any coming electoral juncture,” he added.

Hizbullah’s educational department meanwhile issued a statement accusing some parties of exploiting the events through “stirring sectarian sentiments, shouting provocative slogans and attacking others, which might spark a sedition that no one wishes for except those seeking to ignite it.”

“We call on the competent judicial and security authorities to address these regrettable incidents and we ask them to fully shoulder their responsibility in this regard,” the department added.

A group of al-Khandaq al-Ghamiq, carrying the flags of Hezbollah and the Amal Movement, tried to reach the demonstrators in Martyrs' Square, but the Lebanese army prevented them from advancing by establishing a human checkpoint.

The group shouted, "Minshan Allah, Mr. Yala," indicating that they were waiting for permission to move.

Today, the June 6 march started from all Lebanese regions towards Martyrs' Square to demand early parliamentary elections and reject the authority’s approach and mechanism for managing affairs.