Aoun Urges World Not to 'Abandon the Country of the Cedars' 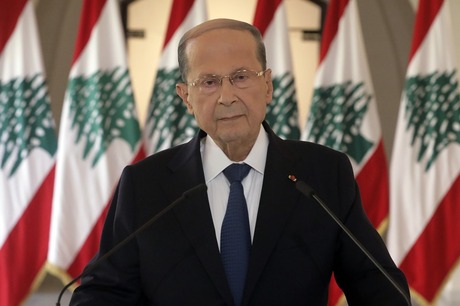 President Michel Aoun on Wednesday urged the international community not to “abandon the country of the cedars,” as he noted that the priority is to “form a government while applying the same criteria to all political forces.”

Speaking at a Paris-organized international virtual conference for rallying humanitarian aid for Lebanon, Aoun thanked French President Emmanuel Macron for “the unwavering support he is always demonstrating for Lebanon.”

“Despite all the hurdles placed in the face of the French initiative, it must continue because the crises that my country is going through exceed its limits,” Aoun added, in an English-language address.

Referring to parliament’s latest decision to call for a sweeping financial audit of the central bank and all state institutions, Aoun said the letter that he had addressed to parliament “has earned a general consensus.”

“Indeed, this national challenge to which I hold on more than anything else, and which I have been claiming since 2005, is above political bickering,” he said.

He noted that “without it, no agreement would be possible neither with the countries that wish to help Lebanon, nor with the IMF.”

“The parliamentary blocs responded with a unanimous agreement on a complete and comprehensive audit,” Aoun pointed out.

He said this decision would allow to “identify the people responsible for the bankruptcy of our economic system, and pave the way for reforms that are necessary for the recovery of the Lebanese State.”

Aoun added: “I am determined, at all costs, to go all the way to rescue the country from the system of political, financial and administrative corruption that has taken it hostage under the guise of various types of codified, sectarian, confessional and social protection.”

“Your assistance is indispensable, through the means that the United Nations and the European Union possess, to fight the embezzlement of public funds and trace down the illegal transfers that were made, notably after October 17,” Aoun said

As for the stalled government formation process, Aoun said that “today, it’s a priority to form a government while applying the same criteria to all political forces.”

“The government’s tasks are huge: it must at the same time launch the workshop of structural reforms, rebuild Beirut and put forth a financial recovery plan,” he added.

“The multiple tragedies that the Lebanese are facing today are dramatic. The country’s economic difficulties have hit hard their savings and their jobs, even undermining the future of their children. The tragic Port blast that struck the heart of Beirut has added to their troubles, along with the Covid-19 that continues to rage in our country and throughout the world,” Aoun told the conference.

“For all these reasons which came on top of each other in an unsustainable manner, your assistance is crucial for the overall Lebanese population, from North to South,” he said.

“This assistance is indispensable, regardless of the selected method, mechanism, process and channel, provided that everything remains under your supervision and that of the United Nations,” the president added.

As for the Syrian refugee crisis, Aoun said that Lebanon continues to “pay a high price with a sheer number of Syrian displaced.”

“It is therefore more urgent than ever that the international community regulates for good their return to their safe territories. Our benighted country has neither the infrastructure nor the means to keep accommodating them, and less even to provide assistance to them,” he said.

Telling the conference that the Lebanese “have always resisted to exist,” Aoun said he has called on the Lebanese people to “rise in a unified voice, to exert pressure where needed, in order to win the anti-corruption battle, an existential war for Lebanon.”

“Today, here and now, I ask the international community not to abandon the country of the cedars which is a treasure for the entire humanity,” the president went on to say.

You, Mr. President, and the forty thieves you have surrounded yourselves with, have already tarnished the treasure called Lebanon. It may be too late, and the world has moved on to bigger problems and more pressing problems that can be solved and not interfered with by the corrupt and selfish politicians who, quite frankly, do not care about Lebanon or the Lebanese, so stop groveling

Aoun: I urge the entire international community not to abandon the country of cedars and our priority today is to form a cabinet according to unified standards.

Aoun is more than a Useful Idiot, a premeditated assassin of a country. Hizbollah is created, armed, financed and indoctrinated by Iran radicals, and therefore by definition a foreign agent and an invading militia. Since 2000, Iran wants to equip Hizb with high precision rockets to create a balance of terror with Israel to serve as an attack dog for its nuclear aim and regional hegemony. This is certainly a kiss of death to Lebanon that prospers with its tourism, democracy and freedom that attracted western firms with their good paying jobs. Aoun knew the risks but sold Lebanon for 30 pieces of silver. Aoun is a curse on Lebanon as much as Hizb is a curse on Shia. They destroyed a country that had by far the best potential in the region. Their day of reckoning is coming! Anyone supporting Aoun or Hizb is a traitor.

Dear God, please give mr Aoun a thunderbolt to the head then send him straight to hell

Aoun Urges World Not to 'Abandon the Country of the Cedars'

I am all verklempt.... so emotional... I am beside myself with sadness.

he sits there begging not to abandon the country of cedars, while he's very well controlled by the militia he aligned his Oranges with that have brought down the country