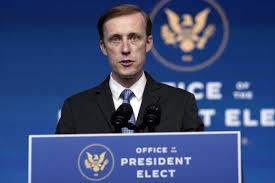 The outgoing Trump administration's decision to classify Yemen's Huthi rebels as terrorists will only cause more suffering for the people of that war-torn nation, Joe Biden's nominee for national security advisor said Saturday.

The rebels control much of Yemen and have faced an offensive from U.S. ally Saudi Arabia, with millions in Yemen depending on aid to survive.

Designating the Huthis a terrorist group is expected to halt many transactions with Huthi authorities, including bank transfers, paying medical personnel and for food and fuel, due to fears of U.S. prosecution.

The designation is set to come into force on January 19 -- the eve of the inauguration of Biden, whose aides had hoped to mount a fresh push to end Yemen's six-year war.

It is also seen as complicating the incoming U.S. leader's promised efforts to restart diplomacy with Iran, which has links to the Huthis.

The terrorist classification has drawn criticism from aid groups, the European Union and many others over fears it will exacerbate the already dire humanitarian crisis in Yemen.

"What is the likely humanitarian impact? The answer is a large-scale famine on a scale that we have not seen for nearly 40 years," Mark Lowcock, the U.N. undersecretary general for humanitarian affairs, said Thursday.

Lowcock said exemptions to allow aid agencies to deliver supplies, as suggested by Washington, would not be sufficient to avoid a famine, adding "what would prevent it? A reversal of the decision."

"Huthi commanders need to be held accountable, but designating the whole organization will only inflict more suffering on Yemeni people"

Typical Democrats point of view... it is like saying there is a difference between hezbollah's political wing and hezbollah's military wing.

Obama's foreign policy in the middle east led to chaos and destruction and enabled iran to wreak havoc in Arab countries through its shia mercenaries.. It sure seems Biden is on the same path.

The Obama administration sold us to Iran. We have good reasons to worry with Biden.

The world is relieved that Biden is the next US president, there is no worse than the present lunatic , selfish and untrustworthy president.
The misery of Lebanon is 100% caused by the Lebanese themselves.
their domestic animosities paved the way for foreign interferences.