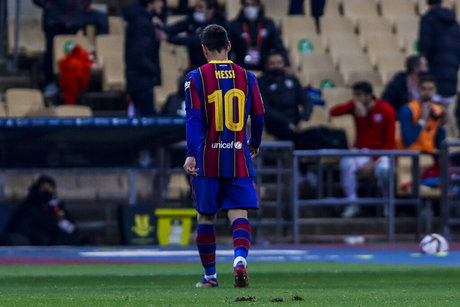 Frustration got the better of Lionel Messi as he saw red in the Spanish Super Cup final, while Inter dealt a major blow to Juventus's Serie A title hopes but Paris Saint-Germain are back on top in France.

AFP Sport rounds up some of the main talking points from across the continent:

Lionel Messi was sent off for the first time in 753 appearances for Barcelona at the end of his side's 3-2 extra-time defeat by Athletic Bilbao in the Spanish Super Cup final in Seville, after lashing out at Asier Villalibre in a moment that seemed to encapsulate his recent frustration with his boyhood club.

Messi had twice been shown a red card playing for Argentina, including at the 2019 Copa America, but never in more than 16 years with Barcelona, before Sunday.

His dismissal came right at the end of extra time, after Athletic had scored a late equalizer to force the additional 30 minutes and then a stunning Inaki Williams strike gave the Basques a 3-2 win and their second Super Cup in six years.

Barcelona had hoped to win their first trophy under Ronald Koeman and Messi had been in good form, with four goals in his club's previous two league games.

"Do I excuse him? I'd need to see it again," said Koeman of the incident.

Andrea Pirlo's hopes of leading Juventus to a 10th straight Serie A title in his first season as a coach took a major knock as the reigning champions lost 2-0 away to Inter, one of the clubs he represented as a player.

Arturo Vidal -- a former teammate of Pirlo's at Juve -- and Nicolo Barella scored the goals as Inter, coached by ex-Juventus boss Antonio Conte, moved level on points with leaders AC Milan, who have a game in hand to play on Monday.

Juve, who had been on their best run of the season with three straight league wins, are now seven points off top spot.

"We couldn't have put in a worse performance than this," said Pirlo, who said his side were "fearful" and too defensive. They now play Napoli in the delayed Italian Super Cup on Wednesday.

- PSG back top as Lyon choke -

Paris Saint-Germain were without their new coach Mauricio Pochettino for their game at Angers after the Argentine tested positive for Covid-19. But, three days after winning his first trophy in management in the Champions Trophy against Marseille, he watched from afar as PSG ground out a 1-0 win that took them back to the top of Ligue 1.

Layvin Kurzawa's goal made the difference, before former leaders Lyon saw their 16-game unbeaten run ended in dramatic fashion in a 1-0 home defeat against Metz. They were denied a late opener by a marginal offside call, and conceded in the 90th minute to Aaron Leya Iseka.

- Bayern bounce back to stretch lead -

Bayern Munich coach Hansi Flick was facing up to his first mini-crisis in charge as his side lost 3-2 at Borussia Moenchengladbach last weekend and then went out of the German Cup on penalties to second-tier Holstein Kiel.

However they got back on track as Thomas Mueller's strike secured a 2-1 win over Freiburg on Sunday to move Bayern four points clear at the top of the Bundesliga from RB Leipzig, who drew 2-2 at Wolfsburg.

With Bayer Leverkusen and Borussia Dortmund slipping up as well, it seems doubtful that any of their rivals have the consistency needed to stop Bayern winning a ninth straight title, although there is still a long way to go.

- Nothing to separate Portugal's giants -

Benfica and Porto are Portugal's two most successful clubs and between them have won each of the last 18 league titles. On Friday they played out a 1-1 draw at the Estadio do Dragao, with Moussa Marega cancelling out Alex Grimaldo's opener before the Iranian Mehdi Taremi was sent off for Porto.

It was a result that left the two teams level on 32 points from 14 games, and perhaps the big winners were Sporting. Looking for their first title since 2002, they stay four points clear and unbeaten, although they were held 1-1 at home by mid-table Rio Ave. Sporting are due to face Benfica later this month.