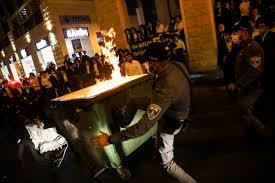 Ten people were arrested in Israel after clashes between security forces and ultra-Orthodox citizens, police said Monday, amid disturbances that saw a bus torched in protest against coronavirus restrictions.

The clashes broke out late Sunday in several ultra-Orthodox districts, including Bnei Brak near Tel Aviv and Mea Shearim in Jerusalem, where residents protested against lockdown measures.

Police said 10 residents of Bnei Brak had been arrested, noting the "disturbances" had "put in peril the lives of emergency services and the public."

Bus driver Ayal Tzipori was injured in the attack and taken to hospital.

He said around 50 people blocked the road with bins and tires, then attacked his vehicle, throwing stones and breaking windows.

"One of the rioters entered the bus and started kicking and punching me," he said.

Firefighters said they were pelted with stones as they tried put out the bus blaze.

The police said they do their "utmost to find those responsible for criminal acts which have put innocent lives in danger."

By Monday afternoon, calm had returned to Bnei Brak, according to an AFP journalist at the scene.

"Those who are responsible for these serious acts in the name of the Torah are committing profanities against the name of God," he said in a video, while also appealing to police to exercise "restraint".

Mayor of Bnei Brak, Meir Rubinstein, said local authorities would cooperate with the police to "put an end" to "incidents of this nature."

Many Israelis accuse ultra-Orthodox Jews, who account for around 12 percent of the country's population, of being disproportionately responsible for the spread of coronavirus.

A week ago, a wedding in Bnei Brak was attended by hundreds of guests, despite a strict lockdown being in force since late December.

Bnei Brak is the Israeli version of Dahye ..

Unfortunately not enough people were arrested, presumably according to the orders of the PM through the Police Minister to be easy on the religious fanatics.
The proof that Israel Police can operate as they should came with the operation in the town in the Galilee just the night beforehand when 150 people were arrested.
Leb731 -Just for your information, I am just one person, using just one name, but it seems that you just can not stand anyone who has opinions different to yours. If you, like me, were an outsider looking in I am sure that you would be writing many more equal handed comments.