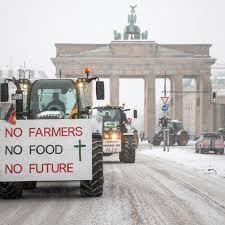 The German government is set to unveil legislation on Wednesday to halt a dramatic decline in insect populations, but farmers are up in arms over measures they say threaten their livelihoods.

Hundreds of farmers drove their tractors into central Berlin on Tuesday, braving snow and frosty temperatures, to protest against the government's "insect protection" draft law.

"No farmers, no food, no future" read a sign fixed to one tractor near the city's famed Brandenburg Gate. "We are here, talk to us" read another.

The policy package, two years in the making, aims to restrict the use of pesticides on German agricultural land to save insects, whose numbers have drastically fallen across Europe in recent decades.

Among the measures proposed are bans on the use of weedkillers and insecticides in national parks and within 10 meters (33 feet) of major bodies of water.

Chancellor Angela Merkel's government also wants to phase out the controversial weedkiller glyphosate by the end of 2023, and tighten rules on using fertilizer.

"We're not against insect protection, but it needs to be adapted to modern agricultural practices," 28-year-old farmer Wilke Luers said from behind the wheel of his tractor at the Berlin protest.

The government has argued that urgent action is needed because insects "play an important role in the ecosystem".

The German Farmers' Association (DBV) said in a letter addressed to Merkel that the planned legislation could reduce available agricultural land by seven percent.

It called for "cooperation" between farmers and environmentalists, and measures built around incentives instead of bans.

But Tomas Brueckmann, from the Gruene Liga environmental organization, dismissed the suggestion.

"We've been trying to cooperate with them for 20 years, it doesn't work," he told AFP.

His campaign group has urged the government not to water down the plans in the face of pressure from agricultural firms.

"The government must finally anchor into law the package of measures to protect insects that it committed to two years ago," the group said in a statement. "It has taken far too long."

But the government's sign-off was repeatedly delayed by objections from conservative Agriculture Minister Julia Kloeckner, who pushed for exceptions to some of the rules.

The final compromise thrashed out between the ministers will be revealed on Wednesday.

The gulf between farmers and environmental activists has deepened in Germany in recent years as concerns about climate change have grown, partly because of the youth-led Fridays for Future protests.

The opposition Green party now regularly comes second in opinion polls after Merkel's conservative bloc, and it could well end up in a coalition government following September's general election.

The shift in the public mood has spurred Merkel's government to act on animal welfare, leading to recent pledges to stop the mass culling of male chicks and ending the practice of castrating piglets without anesthetic.

But farmers complain that they are carrying the cost for the new measures, and that the tougher regulations won't allow them to compete with cheaper agricultural products from abroad.

A large-scale study in Germany in 2017 was one of the first to raise global alarm bells about the plunge in insect populations, triggering warnings of an "ecological apocalypse".

The study found that, measured by weight, flying insect populations across German nature reserves had declined by more than 75 percent in 27 years.