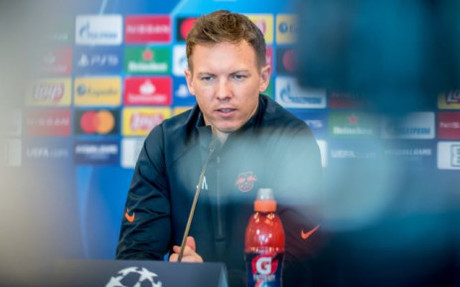 RB Leipzig head coach Julian Nagelsmann is refusing to read too much into the Liverpool's poor recent results ahead of Tuesday's Champions League showdown in Budapest.

Jurgen Klopp's Liverpool have won just three of their last 12 games and fly to Budapest for the last 16, first-leg tie against Leipzig on the back of three straight Premier League defeats.

On Saturday, Klopp admitted he does not think Liverpool can defend their Premier League title by closing the 13-point gap on leaders Manchester City after his side's 3-1 defeat at Leicester City.

In contrast, Leipzig are only second in the Bundesliga behind world champions Bayern Munich after winning their last three league games.

"I don't think I need to warn my side about facing a wounded boxer - they know (Liverpool) is a world-class team," Nagelsmann told reports Monday.

"They don't have the results crisis in the Champions League, but in the Premier League.

"It's a completely different competition, they have crossed off the (Premier League) title and their focus is now only on the Champions League, where they can still win a title.

"They will try to shake off the negative things," Nagelsmann added with the first leg moved from Leipzig to Budapest due to Germany's Covid-19 travel restrictions.

"We have been warned - it'll come down to form on the day."

On Tuesday, Nagelsmann will be without Swedish playmaker Emil Forsberg, who has failed to recover from a knee injury.

"He, unfortunately, won't make it - he still has problems changing direction when running," Nagelsmann revealed.

With Forsberg out, Dani Olmo is likely to play in the attacking midfield with Yussuf Poulsen and Christopher Nkunku up front for Leipzig.