UK Accelerates Vaccine Rollout as End of Lockdown in Sight 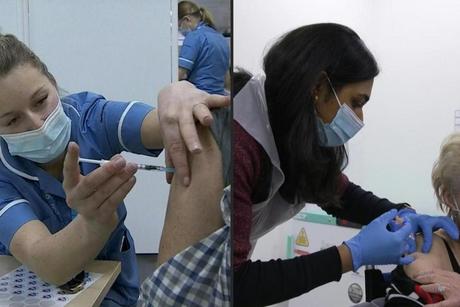 The UK government on Sunday vowed to offer a first coronavirus vaccine dose to every adult by the end of July, as it readied to announce a gradual easing of its third lockdown.

Prime Minister Boris Johnson, who will outline the lockdown review in parliament on Monday, said the faster inoculation campaign would seek to offer a first dose to everyone aged over 50 by mid-April.

The previous targets in the world-first campaign were to inoculate over 50s by May, and all adults by September.

“We will now aim to offer a jab to every adult by the end of July, helping us protect the most vulnerable sooner, and take further steps to ease some of the restrictions," Johnson said, while adding the exit would be “cautious and phased".

Britain, one of the hardest-hit countries in the world by the Covid-19 pandemic with more than 120,000 deaths, was also the first nation to begin a mass vaccination campaign, in December.

More than 17 million people have now received at least a first dose -- one-third of the UK population.

But with infection rates and hospitalizations soaring after an easing of restrictions over Christmas, the government imposed a third lockdown at the start of January, including the closure of schools, non-essential businesses and hospitality venues.

Case numbers are falling again and early evidence suggests the vaccinations are helping to reduce serious illness, while pressure is building on the government to return to normality.

Johnson's cabinet was meeting on Sunday to finalize his House of Commons statement, which is expected to endorse the reopening of schools on March 8 -- although teaching unions say allowing all pupils to return on the same day is "reckless".

"All of us understandably want to go back to normal, but it is right to be cautious,," Health Secretary Matt Hancock told Sky News on Sunday, noting that nearly 20,000 people remain in hospital with Covid.

Johnson's statement is expected to lay out a gradual easing more widely after March 8, including for outdoor activities. But the full reopening of retail and pubs, and attendance at sporting events, will be delayed until later.

John Edmunds, an epidemiologist and government advisor from the London School of Hygiene and Tropical Medicine, told the BBC: "The vast majority of us are still not immune.

Edmunds also called for the acceleration of vaccine trials on children, stressing "there is significant risk of a resurgence" until the entire population is inoculated, not just adults.