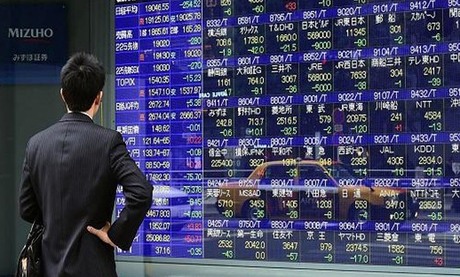 Global stock indexes have cruised to all-time or multi-year highs in recent months thanks to government and central bank backing, the rollout of vaccines, easing of lockdowns, Joe Biden's imminent stimulus and falling infection rates.

But the rally is showing signs of fatigue as traders fret that valuations may have run ahead of themselves, while the yield on benchmark 10-year Treasury bonds -- a key red flag on inflation -- has spiked.

That has led to worries the Fed will have to lift borrowing costs more quickly than expected, removing a key pillar of support for stocks.

Powell sought to soothe those concerns Tuesday in the first of two congressional testimonies, saying inflation was expected to pick up and be "volatile" this year as Americans begin to spend more but told lawmakers the increases were unlikely to be large or persistent.

He pledged to keep the bank's vast bond-buying scheme and low rates in place "until substantial further progress has been made toward our goals" of two percent inflation and full employment.

He added that the rise in yields showed "confidence on the part of markets that we will have a robust and ultimately complete recovery".

US inflation had averaged less than two percent over the past 25 years, he said.

His comments helped Wall Street bounce off intra-day lows, with the Dow and S&P 500 ending slightly higher. But the Nasdaq fell as tech firms that rely more heavily on financing are most at risk from high interest rates.

"Too dovish, and the chair risked exacerbating near-term inflation concerns, and too hawkish of a lean and the Street will increasingly price a withdrawal in liquidity. So overall, the balancing act seems mostly designed to keeping risk assets steering on an even keel."

But he warned the fear about rates remained in place, "and despite some great news on vaccine and stimulus, it's becoming increasingly apparent that the yield reaction to the reflation theme will likely be the central narrative of 2021".

Hong Kong led Asia's losses as it tanked more than three percent after the city's financial secretary said he would lift stamp duty on stock trades -- the first in 28 years -- in his budget as the government looks to tighten its belt. Bourse operator HKEx collapsed more than 10 percent.

On currency markets, the pound held on to gains to sit at levels not seen since April 2018 thanks to a strong rollout of vaccines across Britain that has allowed the government to set out a plan to reopen the country by the summer.