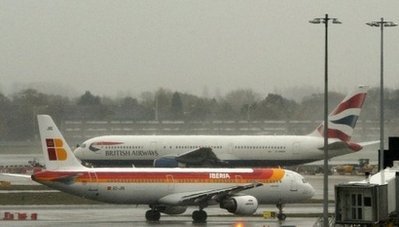 The International Air Transport Association now estimates that traffic will reach between 33 and 38 percent of the levels recorded in 2019, an IATA statement said.

The previous 2021 forecast was for traffic to reach 51 percent of the levels seen before the coronavirus pandemic struck.

Based on actual traffic in January and bookings for February and March, "we know that the first half of the year is going to be weaker than we had expected in December," IATA's chief economist Brian Pearce told a video news briefing.

"This is because governments have tightened travel restrictions in response to new COVID-19 variants," a separate IATA statement explained.

"We expect a steep recovery in the second half of the year" however as more people are vaccinated and governments ease travel restrictions, Pearce added.

Meanwhile, airlines will continue to deplete reserves and "remain cash negative throughout 2021," or spend more than they take in, the statement said.

"Estimates for cash burn in 2021 have ballooned to the $75 billion to $95 billion range from a previously anticipated $48 billion," it added.

Even though carriers have cut costs and some have benefited from a pickup on domestic routes, the sector is unlikely to generate cash and profits before 2022, Pearce said.

IATA Director General Alexandre de Juniac added that burning through tens of millions of additional dollars "is not something that the industry will be able to withstand without additional relief from governments."