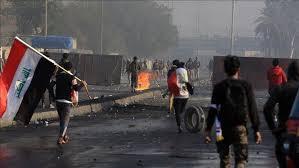 Three anti-government protesters were shot dead Friday in clashes with Iraqi security forces in Nasiriyah, medics said, the deadliest day in a week of violence in the southern city.

Protesters have defied a second wave of coronavirus infections and renewed lockdown measures to vent their anger at the government over poor public services.

Similar protests, also over unemployment and corruption, erupted in late 2019 and morphed into an unprecedented anti-government movement across southern Iraq and Baghdad.

But while they faded elsewhere in the country, rallies have continued to grip Nasiriyah.

This week, demonstrators have gathered outside the main governorate building to demand the dismissal of governor Nazem al-Waeli over a deterioration in public services.

On Friday, three protesters were shot dead by security forces, medics in the city told AFP.

"Another 47 people were wounded but the hospitals are all full of coronavirus patients. We're struggling to find places to treat them," one medic said.

Amnesty International said on Friday protesters were being treated in parking lots, while others were so afraid of being arrested by security forces if they went to hospitals that they were seeking help elsewhere.

It said one witness in Nasiriyah told Amnesty they had seen a protester shot directly in the head.

"The Iraqi government has failed time and time again to address the impunity with which protesters are being killed. When will the bloodshed end?" it said.

Protesters were trying to block off some of Nasiriyah's main bridges throughout the day, but security forces were responding by firing live rounds.

One protester was killed in similar confrontations on Monday and another on Thursday.

Decades of war, government graft and a dearth of investment have left Iraq's water, electricity and other public works in a pitiful state.

Many households have only a few hours of mains electricity per day and complain of polluted tap water.

Nearly 600 people have been killed in protest-related violence since late 2019, including in mass violence at demonstrations but also in targeted assassinations.

One of the bloodiest incidents was in November 2019 in Nasiriyah, when more than three dozen demonstrators were killed at the city's Zeitun (Olive) Bridge.

Amid rising political tensions and the spreading coronavirus pandemic, the demonstrations died down across most of Iraq in 2020.

But they have continued to flare up in Nasiriyah, including in November when nine people were killed during a week of violence.

Kadhemi, as commander-in-chief of Iraq's armed forces, has repeatedly ordered security forces not to fire on crowds.

He has even ordered the removal of top security officials there but to no avail.

Kadhemi has also pledged to bring the perpetrators of all protest-related violence to justice.

Earlier this month, he announced the arrest of four members of a suspected "cell" that carried out assassinations of activists and journalists seen as sympathetic to the anti-government movement.

The renewed violence comes less than two weeks before Pope Francis is set to visit Dhi Qar province, of which Nasiriyah is the capital, as part of the first-ever papal trip to Iraq.