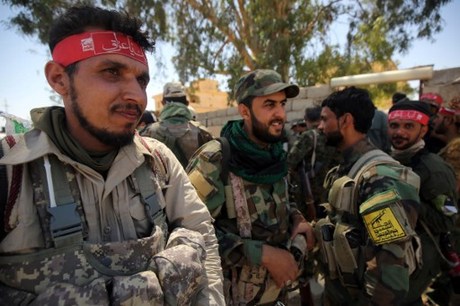 Syria's complex battle ground includes tens of thousands of fighters from several nationalities trained and armed by regime ally Iran, a deployment that has worried the United States and Israel.

The eastern province of Deir Ezzor near the frontier with Iraq is a key hub for Iran's footmen, including Iraqi militia fighters, at least 22 of whom were killed in a U.S. strike there Thursday according to a war monitor.

With these fighters coming under greater scrutiny following the latest U.S. attack, AFP takes a look at the patchwork of Iran-backed forces stationed in the porous border region between Syria and Iraq.

Iran-backed paramilitaries have bolstered the fighting force of the Syrian regime of President Bashar al-Assad since the start of the 2011 war.

Around 15,000 proxy fighters from Iraq, Afghanistan and Pakistan are deployed in Deir Ezzor, according to the Syrian Observatory for Human Rights war monitor.

Kataeb Hezbollah, a pro-Iran group operating under the umbrella of Iraq's Hashed al-Shaabi network of militias, is one of the most well-known of the paramilitary formations.

It has been hit by the United States and Israel in Syria, with the latest American strike taking place on Thursday.

A spokesman for the group said they are deployed across the border to protect Iraq's frontier.

The border area is a key segment of the route that pro-Iran armed groups use to move fighters, weapons and even consumer goods between Iraq and Syria. It's one of their most prized locations.

Together with Kataeb Hezbollah, these forces are known to have especially close ties to Iran's Revolutionary Guards.

Iran's ally, the powerful Lebanese Shiite movement Hizbullah, has also deployed fighters in the region since it officially announced its military backing for Damascus in 2013.

Hizbullah said in July 2019 that it had reduced its fighting force in Syria as violence died down in large parts of the country, following the defeat of the jihadist Islamic State group.

Shiite Afghan militiamen of the Fatimid Brigade and Pakistani fighters with the Zainabiyoun Brigade are also stationed in Deir Ezzor, according to the Britain-based Observatory.

The Fatimid Brigade is considered to be one of the largest pro-Iran groups in Syria, according to the war monitor, and along with the Zainabiyoun Brigade has been hit by U.S. sanctions since 2019.

Thousands of Syrians are also in Iran's pay and have joined local militias in Deir Ezzor.

Pro-Iran groups in eastern Syria have established bases, outposts and arms depots as part of their deployment.

They have been regularly hit by air strikes blamed on arch-nemesis Israel which has pledged to end Iran's presence in Syria.

Pro-Iran groups also have stakes in education and healthcare in the region.

Tehran-backed groups have also set up clinics in the region, providing vitamins and face masks to locals during the coronavirus pandemic.

"Iranian control is no longer limited to military and security presence," Oliver said.

Omar Abu Layla, an activist who heads the DeirEzzor24 media platform, credits Iran's sway in the region to the services it provides the local population in exchange for loyalty.

They include educational and healthcare services, as well as food handouts from Iraq.

But their most important success is to spread security in a region once ravaged by jihadist attacks.

"Tehran and allied groups have succeeded in enforcing order in areas under their control," he said.