Lebanese Crowds Gather in Bkirki to Back Rahi 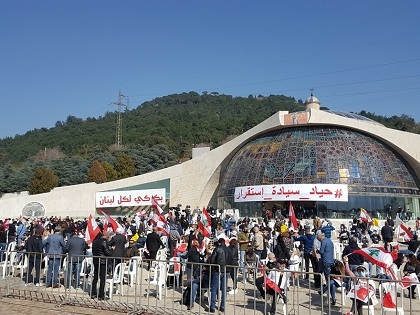 Crowds of Lebanese flocked from various Lebanese regions to Bkirki on Saturday, in a stand of support for the Maronite Patriarch Beshara el-Rahi and his calls for a UN-sponsored international conference for Lebanon, amid the country's leaders inability to form a much-needed government.

People started gathering at noon in different areas before heading in convoys to Bkirki.

They brandished the Lebanese flags and broadcast through loudspeakers his statements calling for neutrality of Lebanon and the internationalization of the Lebanese file.

Al-Jadeed TV station said Rahi’s speech will reflect the calls he made during his sermons urging President Michel Aoun and PM-designate Saad Hariri to “quickly” form a government, and to avoid conflicts over jurisdictions and number of ministerial seats.

Sources of Hizbullah and Amal Movement, who had criticized Rahi’s calls for an international conference, told al-Jadeed that “there is no disagreement between Bkirki and the Shiite duo over saving Lebanon, and that both agree on the need to accelerate the formation.”

A delegation of the Maronites for Lebanon Gathering participated in the Bkirki gathering, in addition to Shiite and Sunni and Druze religious figures.

Political figures were requested to refrain from taking part so that not to politicize the event.

A large group of people carrying a picture of Ralph Malahi, one of the victims of the colossal August 4 Beirut port explosion, also joined the crowds.

MTV quoted Bkirki sources as replying to sayings that Rahi is going to withdraw his call to internationalize the Lebanese file after facing criticisms from Hizbulah and the Free Patriotic Movement. They said: “You can judge after you listen to Rahi’s speech.”

of course it is understandable, people have nothing but hope, it is sad to see this , poor helpless people.