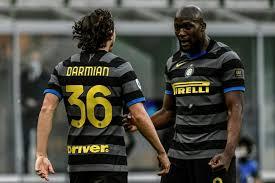 Romelu Lukaku scored after 33 seconds and then set up a second as Inter Milan beat Genoa 3-0 to extend their lead at the top of the Serie A table on Sunday.

Inter are seven points ahead of second-placed city rivals AC Milan who are at Roma later Sunday, and 10 clear of champions Juventus, who were held 1-1 at Hellas Verona on Saturday and have played a game fewer.

Lukaku scored with the first chance at the San Siro, then laid on Matteo Darmianfor Inter's second in the 69th minute. Alexis Sanchez came off the bench to add a third with 13 minutes to go.

"We're first in the standings and it's a good feeling," said Lukaku, whose side are trying to deny Juventus a 10th consecutive league title after finishing runners-up last season.

Antonio Conte's side followed on from last weekend's 3-0 derby win over Milan, notching up a fifth win in a row as they push for a first league title since 2010.

"These matches are opportunities for us to give signals to others, but the championship is long," continued the former Manchester United player.

"We must not give up, last year we lost in these matches, this year we're growing.

"I'm in a good moment of my career but the important thing is that Inter wins."

Lukaku led the way, completing a give-and-go with Lautaro Martinez after good work from Nicolo Barella to fire in from an angle for his 18th Serie A goal of the season, one shy of leading scorer Cristiano Ronaldo.

Inter missed a string of chances to pull further ahead against their 13th-ranked rivals with Barella and Darmian both rattling the crossbar and Mattia Perin denying a pair goal-bound efforts from Lukaku.

But the giant Belgian set up defender Darmian, who took the place of suspended Achraf Hakimi, for his first league goal for Inter, with Sanchez scoring minutes after coming off the bench getting his head to a rebound after Perin had denied Lukaku.

The 27-year-old Belgian has scored six goals in the last five games.

Atalanta shook off their Champions League defeat to Real Madrid midweek with a 2-0 win at Sampdoria to move up to fourth, equal on 46 points with third-placed Juventus.

Ruslan Malinovskiy broke through five minutes before the break with Robin Gosens adding a second with 20 minutes to go in Genoa.

Gian Piero Gasperini's side fell 1-0 against Real Madrid in Bergamo in a game they played over 70 minutes a man down.

Duvan Zapata picked up an injury in that game and was ruled out along with Hans Hateboer, with Gasperini sitting out a touchline ban.

Atalanta could thank goalkeeper Marco Sportiello and defender Jose Palomino for keeping their slate clear early before taking hold of the game.

The breakthrough came when Luis Muriel set up Ukrainian midfielder Malinovskyi to blast into the top corner for his second league goal this season.

Matteo Pessina and Josip Ilicic came off the bench before the hour with Atalanta thereafter dominating.

Joakim Maehle set up Gosens for the second with goalkeeper Emil Audero denying Pessina the visitors a third.

In the relegation battle, Cagliari snapped their 16-match winless run in coach Leonardo Semplici's first match in charge with a 2-0 success over rock-bottom Crotone.

Leonardo Pavoletti got the first after 56 minutes with Joao Pedro adding a second from the penalty spot four minutes later to give the 18th-placed Sardinians their first win since November 7.