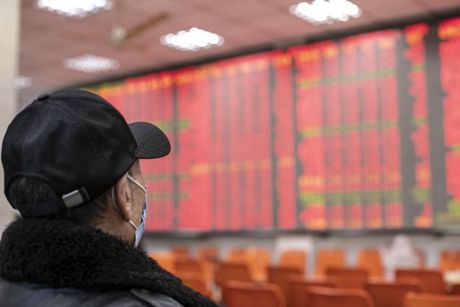 Asian markets struggled Tuesday to maintain a global rebound from last week's rout as the improving economic outlook and vaccine rollouts were offset by lingering worries that valuations may have run too far.

US lawmakers' push to get Joe Biden's huge stimulus through Congress in the next two weeks and Wall Street's powerful lead -- driven by a rally in tech firms -- were not enough to keep spirits up, with inflation fears also hanging in the background.

A ramping-up of immunisations, falling infection rates, government and central bank support and the easing of lockdown measures have fanned expectations that the global economy will enjoy a blistering recovery this year and next, helping propel equities to record or multi-year highs.

But the bright-eyed optimism has given way in recent weeks to worries that the so-called reflation trade will send prices soaring and force officials at the Federal Reserve and elsewhere to wind in their ultra-easy monetary conditions, including lifting interest rates.

And the rise of yields in government bonds in the US and other key economies last week sparked a mini meltdown, which was exacerbated by profit-taking as investors considered some gains to have run a little too far.

However, a stabilisation in the bond market Friday and Monday appeared to have staunched the bleeding for now, while analysts said worries over a surge in inflation and rate cuts were overdone.

And in an interview, top Fed official Thomas Barkin reiterated the message from his bank colleagues that the rise in yields was nothing to be worried about.

"In fact, I would be disappointed if we didn't see yields... rise as the outlook improves," he told the Wall Street Journal in an interview.

But Hong Kong and Shanghai turned into negative territory as the day wore on, after a top Chinese regulator raised concerns that bubbles were forming in financial markets.

US and European markets were not reflective of their underlying economies and would face corrections "sooner or later", said China Banking and Insurance Regulatory Commission chairman and central bank member Guo Shuqing on Tuesday.

"China's monetary policy has not been as easy as the US and Europe," Steven Leung, at UOB Kay Hian (Hong Kong), said. "This latest comment will create worry of further tightening."

Guo's comments come after a number of observers warned equities were due a retreat following a year-long advance from their March 2020 nadir.

His words implied Chinese central bank policy "will be less accommodative going forward", said Axi's Stephen Innes. "This indicates how sensitive markets are to policy accommodation being taken away. It also highlights that central banks will run at different speeds in pulling away from last year's crisis."

Tokyo, Sydney and Taipei also fell, but there were gains in Seoul, Singapore, Wellington, Jakarta, Mumbai and Manila. London, Paris and Frankfurt opened in the red.

The losses followed Monday's surge and a Wall Street rally that saw the Nasdaq pile on more than three percent as tech firms such as Apple, which have been hit by selling as they are more susceptible to higher interest rates, being snapped up.

Eyes are now on Washington, where the Senate is due to debate Biden's economic rescue package after it passed the House at the weekend.

Democrats want to adopt the text before March 14, when extended unemployment benefits from a previous aid plan expire.

Oil prices extended Monday's losses ahead of a meeting of OPEC and other top producers this week, where they will debate winding back output cuts that have been in place for the best part of a year as they eye prices at 13-month highs.